Twenty years ago today, tanks rumbled through the streets of Moscow. Do you remember where you were?

Every generation has its historic “where were you when” moments. For ours, there’s the Challenger disaster (1/86), the fall of the Berlin Wall (11/89), and most vivid of all for me, the three-day Soviet coup in late summer of 1991.

I was a 21-year-old university student then, happily backpacking through Europe (on a quest, as one Danish friend put it, to “see the most train”) en route to Moscow for a semester of study abroad. We’d stopped in Venice to stay with friends in a magnificent old apartment. A quick call home found worry in my mom’s voice and an exhortation to switch on CNN.

We watched the coup unfold on a TV screen in Venice, a week before our appointment with a train to Moscow. The images still reverberate in memory: barricades in the streets, Russians shaking their fists at soldiers, Yeltsin’s famous speech on the tank. See RIANovosti image gallery and timeline here. 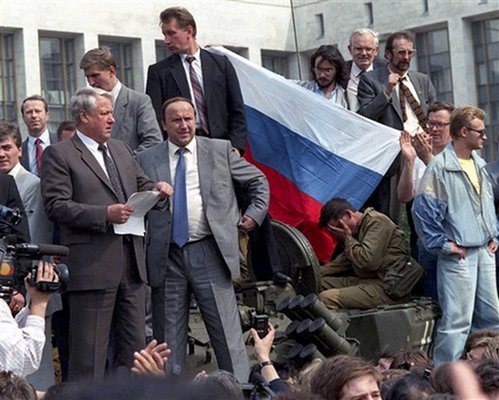 Initially, it certainly seemed like a pretty pathetic coup, as coups go—young soldiers manning the tanks didn’t look particularly fierce; they looked more…confused. Ditto for the Communist hard-liners, calling themselves an “emergency committee” (those masters of euphemism), who instigated the coup—for perhaps the first time in Soviet history, the Old Guard came off as more ridiculous than sinister. See this “PRI’s The World” feature on the coup.

Still, we wondered if the theatre of the absurd being acted out in Moscow might veer towards tragedy, as precedent would suggest. And we wondered whether we’d soon be headed home instead of East.

Another phone call home from a Munich train station: “Gorbachev is back in power!” came my my mom’s voice, thinned by distance and echoes, but clearly relieved. And a few days later, we boarded a train to Moscow. The well-lighted West shrank behind us, and eerie, green-gray, fishbowl images of Soviet Russia scrolled by our windows as we clattered eastward.

First impressions: men tearing down a statue of Dzerzhinsky, flowers on a bridge for the 3 killed during the putsch, a litter of tram-car barricades near the White House, a sense of exhilaration in the streets. Of course, we headed straight to Red Square that first day, where a crowd had gathered to meet suited men and women emerging from a Kremlin gate.

We pushed into the pulsating throng of middle-aged men and women who surrounded and shouted at the people leaving the Kremlin. My university Russian was no match for the chaos of voices. I absorbed a general sense of their excitement and outrage, but none of the detail.

There was no wall to tear down in Moscow, but symbolic acts abounded: Russian flags replaced the Soviet; Dzerzhinsky and Stalin fell from their pedestals and gathered in a park, a garden of ghostly stone. (Someone had painted red fangs on Papa Joe.)  Streets, parks, and metro stations lost their old names—Gorky fell out of favor once again and lost his namesakes. Imagine the comedy of Russian students trying to grasp directions to places undergoing a politio-linguistic transformation that didn’t always match the current signage.

By the time we left Moscow that December, the Soviet Union was no more, and dead with it, already, were many of the happy illusions and hopes that the coup’s failure had stirred. Soon, crime had begun to fill the power void. (Four students in our group of ten were victims of one attack or another that fall, from muggings to one serious beating.) And then there were the shortages: by mid-fall, state-store shelves were empty. By November, even potatoes weren’t so easy to find.

We foraging students quickly learned to operate within the three parallel economies at work, as the old system fell away and nothing even vaguely organized emerged to replace it.

1. State stores offered food for a few kopecks, which to us Westerners was play money, nothing at all. But for Russians on official Russian salaries, these stores were the only affordable (and legal) option, as I understood it. As the fall pressed on, lines grew, in direct proportion to the eternal surliness of shopkeepers, and the shelves emptied. By winter, the stores had become purely theoretical—vacant museums to a failed economic theory.

2. Markets—Several large indoor markets, along with thousands of informal sellers at Metro stations and squares all over the city, offered goods and edibles for sale: stacks of watermelon, whole pigs, tiny burlap sacks filled with colorful spice powders, barrels full of pickles. It was explained to me that this type of selling was considered “extralegal,” although I can’t be sure that’s true. What I do know is that the prices were higher than at state stores by a factor of 10, 100—who knows? The value of the ruble changed every day, at least on the black market. So said Mustafa, the Ugandan mafia lord who sold us rubles from his HQ on the top floor of our institute. He, effectively, set the exchange rate. 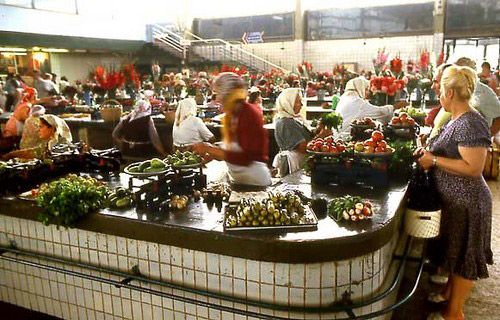 3. Hard Currency Stores (Берёзки) – Several grocery stores sold Western products at Western prices, but only if you had hard currency. An Irish store took dollars, another took Deutschmarks, and so on. Not only were the prices astronomical for ordinary Russians living within the “legal” economy; Russians weren’t allowed to possess hard currency at all. Imagine a store in your neighborhood that only “rich” foreigners were allowed to enter. I’m not proud to admit it, but I did enjoy a Guinness or two at the Irish House that fall. It felt, at times, like waking up from an dismal gray dream. (See this NYTimes story about hard-currency stores in 1991. It’s a great portrait of the chaotic parallel economies of that time.)

And then there was the McDonald’s economy. 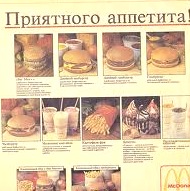 Even in the snow, the line usually stretched all the way around Pushkin Square, and people waited for hours to enter a roiling madhouse of warmth and fried smells, where you’d shout your order across people’s shoulders to the smiling young people, working their dream job. Yes, we ate there. Don’t judge us too harshly. After weeks or months of having to fight with (or bribe) an assortment of surly maitre’d’s for the right to sit down in a restaurant, sometimes you just want to get a fucking burger without resorting to conflict or extortion. And the cultural scene at Pushkin Square that fall was rather festive, really— a comical Soviet take on free-market economies. Enterprising souls offered photo ops with cardboard cutouts of Gorbachev or giant stuffed animals; missionaries handed out Russian-language bibles. And we waited, if you can imagine, hours for a dvoinnoi cheezboorgair.

I’m no historian, no economist, just an observer, looking back, reviewing the images through the eyes of the naive 21-year old I was then. But in retrospect, I wonder if the bitter realities of how the so-called free-market unfolded there struck the initial death-blow to Russians’ (and other former Soviet peoples’) euphoria after the fall of the Soviet empire. I remember an old woman crying and shaking her fist in front of the Irish House one day. She wasn’t allowed to enter. (Why, why, why didn’t I put my hand on her shoulder and offer to buy her something?! Why are we so stupid and scared at 21?) Another babushka (that’s “BAH-boosh-kah,” not “ba-BOOSH-ka,” just for the record) stopped me in the street one chilly day and asked me why I’d come to such a terrible place. An elderly rest room attendant in Leningrad-now-St-Petersburg-again told me tales of surviving the Blockade, only to face this terrifying uncertainty. It was hard to imagine that a woman who’d endured relentless bombardment and starvation, unbearable cold and loss, and the most ruthless war the world has ever seen, could find the uncertainties of 1991 the most terrifying of all. I sensed a certain flair for hyperbole but felt she was sincerely fearful.

There’s one last impression from my first Moscow day, one I’d almost forgotten; but it seems, only in retrospect, to eerily portend what would become of the last Russian revolution. Young black marketeers approached us in Red Square and invited us to either 1. purchase military hats or 2. dine with them at the Hotel Rossiya. We chose the latter.

At the bar, a gigantic, flat-headed young man sitting next to me grinned wildly just before tearing the lid off a bottle of beer with his teeth. “Здесь (here) bar!” he said. “Здесь where I vork!”

We proceeded to share an elaborate, multicourse dinner with 2 black marketeers named Kolya and…(I forget), and their ladyfriends…whom apparently, the males shared between them at will. I doubt these entrepreneurs were more than 19 years old, but that night (and, as they explained, every night), they consumed a lavish feast at the Rossiya that would have cost many times the average Russian monthly salary. 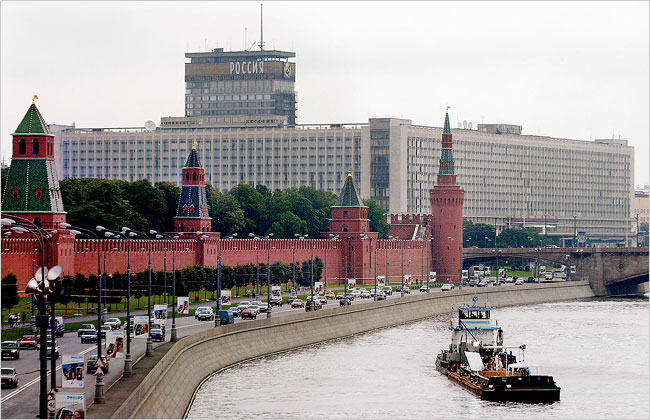 I have the sense that to many Russians’ minds, these are the men who stepped into the power vacuum that emerged in the wake of the Soviet Union’s rather sudden collapse. Maybe not these exact thugs, but other, bigger-time thugs, opportunists with extensive criminal histories who knew how to seize the moment, or the oil industry, or whatever happened to be lying around for the taking. And now these delightful fellows are enjoying the bounties of freedom! The freedom to fly planeloads of hookers to alpine resorts! I imagine our young entrepreneurial dinner companions, now 40something, tearing the corks out of bottles of Cristal with their teeth somewhere on the French Riviera.

I wish I’d had the opportunity to witness something different that fall: a promise kept, courage rewarded, the birth of real, lasting freedom and opportunity. I especially wish that for the Russian friends I made, with whom I spent so many cold winter nights in warm kitchens.

Today, around half of Russians old enough to remember the coup believe that the events of August, 1991 marked the beginning of their country’s precipitous, inexorable decline. The greatest tragedy of the coup, it seems, is that so many Russians view it, and the Soviet Union’s collapse, as a tragedy.

For an extremely well-written (and far better informed) explanation of the 1991 coup, its aftermath, and Russia’s so-called “August curse,” read this excellent article by Julia Ioffe for the New Yorker.