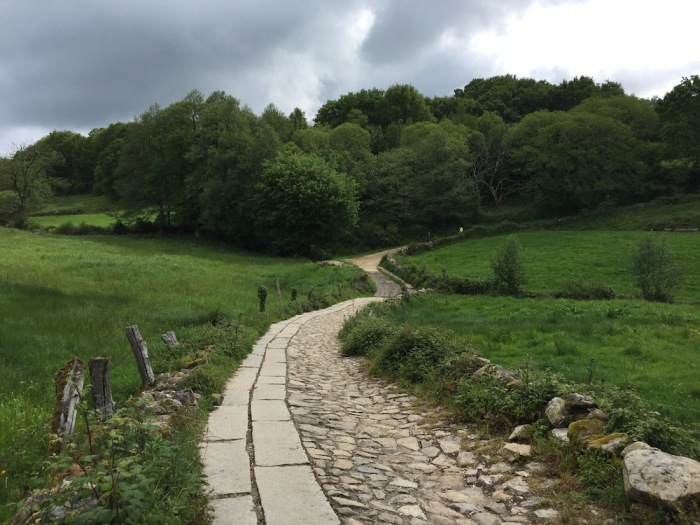 A beautiful essay on grief, friendship, and very long walks, by a young Swiss pilgrim we met on the Camino in 2015.

Before I walked The Way, I existed in the controlled spiral of everyday life. And then, I lost someone. He died in a traffic accident, leaving behind two beautiful little girls … and me.

I dreamed of living as I had before, but I could not dream a life without him. I would not permit myself moments of forgetting, of laughter or silliness, so I switched off my emotions. I felt watched by everyone. I buried myself in work. As a nurse, I could easily lose myself in caring for people who needed more than I did. I lived only for others. I fought against anyone who tried to help and told people I was fine. But I was drowning in grief.

A year later, I decided to walk the Camino for him. I was determined to lay his photograph at Cruz de Ferro on the anniversary of his death. I hoped it might help me to say goodbye. But I was afraid that if I did, I might not feel him with me anymore.

I walked for him, but I had no idea what the road would do to me. I do not like to show weakness. But the Camino broke me down and carried me to the very edge of my strength.

For the first few days, I could walk 20k in 4 hours. Later, when my leg began to throb terribly, 20k might take me 11 hours or more. There were times when I was nearly fainting with pain. I left every morning at 5am to give myself extra time. I realized that those solitary morning hours did give me time … to grieve. Some mornings I cried for hours. It was the first time I had let myself do that.

On the Camino, I learned that there are times when you cannot be strong. I had always been ashamed to ask for help. But on the Way, I had to admit to my new friends that I needed it.

I had always been ashamed to ask for help. But on the Way, I had to admit to my new friends that I needed it.

I remember one very long day, when everyone was waiting for me to arrive, I got fed up with my pain and slow progress. I threw down my sticks and cursed. “Fucking shit Camino!” I screamed. Back home in Switzerland, I don’t usually curse. But the Way inspired me to add all sorts of foul language to my vocabulary.

I made so many friends from all over the world. I saw strong men cry, and I learned that it was OK for me to show emotions. I discovered that it’s normal to have a bad day, and that after you curse and throw your sticks, you can laugh about it. 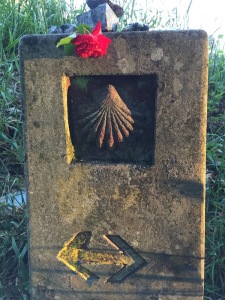 There were days when I could not walk, and I was afraid of falling behind my new friends, who had become so dear to me. But I came to know that the hours I walked alone were necessary. And maybe the physical pain I was feeling was no accident. My injured leg could not be ignored … the way I had, for so long, ignored my grief.

And slowly, the realization seeped into me: The Camino is not a farewell. It is an introduction — to myself. It showed me that I had to treat myself with the same care that I showed my patients. I learned to take care of body and to make my way slowly. And finally, I started to enjoy my walk.

I still like to remember a situation that changed the Camino for me. We were only two days from Santiago, and I wanted to be fast and strong that day. I concentrated on my steps, determined to move quickly. And then I met two Australian pilgrims who invited me to join their spontaneous picnic. I shared a beautiful afternoon of sunshine, camaraderie, and a little too much good Spanish wine. And suddenly, I was laughing, carefree, enjoying the moment. I will never forget that afternoon. And from then on, my pain was gone. For the last two days, I enjoyed every step, every kilometer.

Those encounters on the Camino were very precious to me. Every day, in my thoughts, I walk with each of the people I came to know. I owe them so much, because they helped me to find my way.

I’ve learned to give myself what I need, whether that means tears or solitude, good wine or slow steps. I’ve learned what it really means to give yourself time to mourn and what it means to walk with someone. At the Cruz de Ferro, on the one-year anniversary of his death, I whispered goodbye to my friend. But he walks with me still. I feel strong now, and ready to begin a new phase of life.

When I came back, everybody said I’d changed. Maybe I did. But if you look into my eyes, I’m still the same person.

I said this would be my first and last Camino. But my backpack is still near the door, ready to go again. Maybe next time I won’t curse quite so much, and maybe I’ll drink a little less good Spanish wine. —Sheila W.

You may also enjoy:

A Pilgrim’s Progress — On The Way, a 5’3″ woman’s gotta learn to be big sometimes, especially when her Big Strong Man feels small.

8 thoughts on “Strength and Weakness on the Camino”