I wrote something vaguely resembling the following post, after consuming two daiquiris at a neighbor’s pool about two weeks ago. After relishing the rainstorm for a few minutes in the backyard a la naturale, I channeled this strange rant while still dripping with chilly raindrops. This is a warning to all those who think chemicals stimulate quality artistic expression.

The Philosophy of Two Daiquiris 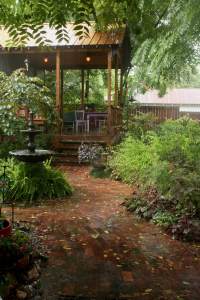 Rainy Sunday in the Yard

It’s a beautiful Sunday afternoon, and the lovely pool party at my neighbor’s house has just been rained out. Watching the storm whip about the garden got me to thinking about rain, the vagaries of Nature with a capital “N,” and the silliness of my last post.

It strikes me as hilarious that immediately after I posted that precious aquaphilic panegyric to precip a week and a half ago, I spent a miserable, wet night in a tent at the Buffalo River after pronouncing, with the confidence of a skywatcher, “Even if it does rain tonight, it’ll be showery and fleeting. I mean, it’s not like it’s gonna rain all night or anything. It’s July, after all.” I was pretty much asking for it.

I was, of course, thinking of any normal middle-to-late summer in Tennessee, usually characterized by scratchy brown grass, clouds of dust, and gardeners like me shaking their fists at the hazy sky. The damn thing is chock full of moisture, I rage, but it won’t turn any of it loose! Hal refers to these summer-afternoon skies as “turgid”: fat cumulus clouds boiling up with suspended water droplets and convection, trembling, desperate to burst loose with a torrent of rain and wind…..oh, the desirrrrre….but nada. The day ends with a humid whimper, no satisfaction to be had for anyone, least of all my crunchy perennials.

That’s the kind of standard-issue July I had in mind when I made my confident pronouncement upon our Buffalo River neighbors’ porch, as we shared a bottle of wine to the accompaniment of a sprinkling of raindrops drumming on their tin roof.

After we turned in at our tent for the night, it then proceeded to rain for ten hours straight. Not a soothing, gentle patter, mind you, but sheets of rain and around five hours of full-on thunderstorms rolling down the river gorge like Sherman on the march.

Picture the standard weather front: a verticalish line passes over you, lengthwise, and the brunt of the storm rushes by in under an hour. Usually. In this case, the line, bizarrely, was aligned horizontally–imagine a sort of grin across a map of the Eastern US–and the whole thing passed over the tiny dot that was us, in a horizontal manner. Hour after hour after hour. This storm system wasn’t merely a capricious universe laughing at my hubris, as nature is wont to do. It was slapping-its-mama guffawing, it seemed to me.

To believe that is, in and of itself, hubristic as all getout.

We want to believe the universe (read: God, Nature, Fate, or whatever you believe in) works that way. We want to think it somehow read my silly, rain-loving post and chortled, then decided to  show me who was boss by demonstrating how after a time, rain that casts itself upon barely protected people can become decidedly uncute after a number of sleepless hours. 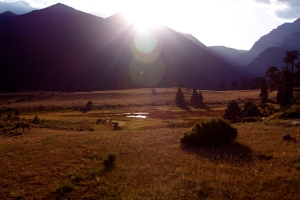 The Rockies Don't Care, Either

Unfortunately, I get the sense that the universe is far too busy to waste time proving points to the likes of me. I really enjoy the signs in Colorado that say, “The mountains don’t care.” That gets the point across, as far as I am concerned. The Rocky Mountains are neither for you or against you. The bears don’t love you or hate you, regardless of “Grizzly Man’s” earnest protestations to the contrary. (Go see the Herzog movie I’m referring to–crazy stuff.)  They eat you because they are hungry or fail to do so because the salmon are running that day. The blizzard screams across the mountaintop and erases some mountain-climbers from the earth not to teach them a lesson about the dangers of ambition, but simply because that’s what blizzards do. Like a giant finger flicking away a gnat.

I’m comforted by the notion that Nature is indifferent to me personally. I much prefer that mode of thinking than that of imagining that the Gods have it in for me and a few other Chosen Ones in their sights. The ubiquitous and rather crass bumper sticker announcing that a certain scatological bodily function does, indeed, occur suddenly strikes me as a poignant and sophisticated philosophical statement. Sometimes, things happen to us because they do, not because of Karma or divine retribution. One thing I am pretty darned sure of is that God did not Katrinaize New Orleans to punish it for its sins. Katrina hit NoLa because it got really hot in the Gulf and something had to give. 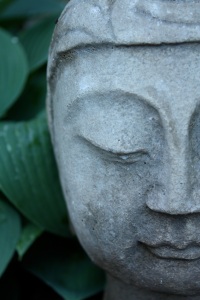 Does God really have to be angry and vengeful?

Spinoza’s “Deus sive Natura,” his “God or Nature” concept, is perfect and all-encompassing and the reason for all things…but does not “care.” (Philosophers, am I remembering my Phil. 102 class correctly?)  I like the God Spinoza has in mind. I don’t mean this in a nihilistic way at all; in fact, to me, it’s just the opposite. Here’s what I mean by that: Spinoza’s God, if I understand the concept properly, does not go around offing some people and saving others.  He does not cure the cancer patients who pray the most sincerely while failing to cure those who don’t believe quite fiercely enough.

No thank you to that belief system: I’m happier believing in the whims of a blind-justice Almighty who smites us all unequally, but randomly and without malice, than in a God who selects some for their righteousness and smites the crap out of us less worthy souls. It’s lousy enough to die of a prolonged illness or lose your spouse in a stupid car accident when you believe it’s a random act. But throw in the rage of a Creator who is punishing you for some wrongdoing or failure of faith!? It’s almost too much to bear. That’s more control over my destiny than I care to deal with.

I don’t think God wants Notre Dame to beat the other team. I don’t believe He brings rain to the tribe who sacrifices the fattest sheep.

This is the happiest philosophy for a gardener, I have decided. I am certain that I have only minimal control over the outcome of this little grren piece of earth. I do my best work, and some of the plants grow as a result. It rains or it doesn’t, not according to my faith or self-discipline, but according to the whims of a capricious summer sky. It does not love my garden. It does not hate it. It does not root for its success. And so if it does not rain for fifteen weeks, and twenty Japanese maples die, I can take comfort in the knowledge that &$%# has Happened, and it has not happened as a result of my lack of faith or failure to sacrifice a sheep. It has merely happened. My job is to move on, re- plant the Japanese maples, and hope the rain comes back. 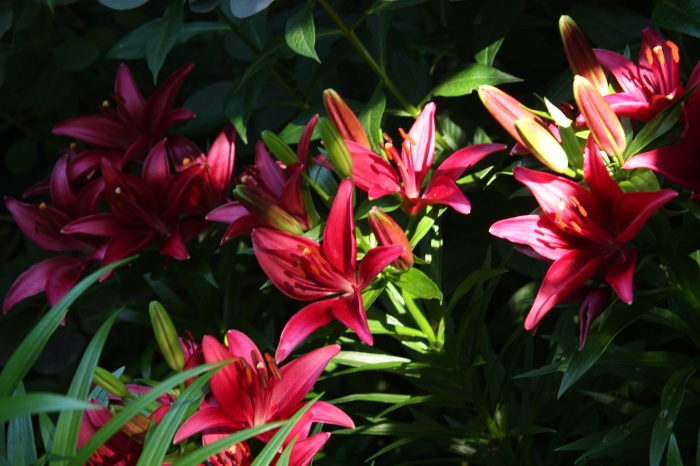 One thought on “The Universe Reads Previous Post, Gives the Lazy Gardener the Finger”