This summer, The Atlantic began running a weekly retrospective of World War Two—a series of photographs from different eras and theatres of that great war. The photographs are riveting, calamitous, heartrending.

Seventy years ago this summer, the German army invaded the Soviet Union, breaking a non-aggression pact between Stalin and Hitler and raining unimaginable destruction upon Ukraine, Belarus, and Western Russia. From the last week of June, 1941 and through that summer and fall, the Nazi advance seemed inexorable, the USSR’s fall inevitable. In this installment of The Atlantic’s retrospective, you’ll see images of the German attack, nicknamed “Operation Barbarossa,” from the June 22 invasion to the Battle of Moscow.

Why am I telling you this? Because I once spent an evening in a Soviet WWII veteran airwoman’s apartment, sharing homemade vodka from a canteen and agreeing to help translate and edit her war memoir. And then proceeded to spend 2 years keeping my promise. So WWII doesn’t feel quite so distant or abstract to me. I see it through her photographs and recollections, the medals she wore and tales she told me over shared homemade vodka one night in a cozy Moscow apartment.

In the next weeks and months, I’ll post occasional excerpts from her book, as if she were blogging about her experiences…seventy years after the fact. I don’t know exact dates in many cases, but the next few entries will be from the summer and fall of 1941, during Barbarossa’s catastrophic early months.

In this first excerpt (pardon me while I catch up to September), Anna Yegorova, a young flight instructor in 1941, recalls the morning of June 22. She and some aviatrix-girlfriends were having a picnic on a beautiful summer day:

(We) roosted on a blanket spread across the thick, sweet-smelling grass…The virgin forest uttered not a sound, sunlight filtered through the branches, and dew sparkled on the grass like diamonds.

And then, suddenly, voices—unnaturally loud men’s voices, arguing. I turned my head toward where our male comrades had been sitting. A man…approached, his face darkened with alarm. His voice trembled as he said, “Girls, it’s war! I just heard it on the radio in the village.”

…Seconds after the pilot uttered those thunderous words, the scene before us transformed. The colors of the forest morning faded, and the once tranquil silence twisted into something ominous…

The Soviet Union would lose an estimated 27 million citizens in that conflict, which they call the “Great Patriotic War.” Only around eight million of these were soldiers, airmen and airwomen, or combatants in any official capacity.
** 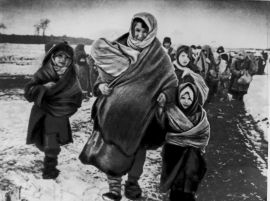