It’s autumn in the garden, so I’m done.  Right?

Wrong.  It’s time to put the garden to bed and prepare for spring.  If winter ever comes, that is. . .

It’s tempting to look at the ruin in October and November with arms akimbo, sigh in exasperation, and leave it for spring.  To do so would allow the ground ivy to scramble at will and the wild violets to multiply promiscuously.  Such promiscuity wreaks havoc to the purity of a bed of choice perennials.

My first consideration is seed gathering.  Some annuals are far too easy to grow from seed to purchase as plants.  Among them are cosmos, marigolds, and most annual vines.  When you gather the seed pods, separate the seeds and lay them out to dry.  Then put them in a container where they will remain dry, relatively cool, and out of sight until April, when you can scatter them with a light covering of warm soil in situ.

Pull up and toss the annual plants into the compost bin along with all those pesky leaves.    If you shread the garden debris, it will break down faster into black gold.  Some people put it directly on the garden as cheap mulch; however, while it will indeed inhibit some weeds and break down and enrich the soil, it can also cause disease and harbor seeds that need only a little sunlight to germinate.

Next, deadhead or cut to the ground perennials that have gone to seed.  Most of those beauties are hybrids and will not grow true to the form of the parent plant.  That ‘Kim’s Kneehigh’ echinacea which grew to a diminutive eighteen inches could very well morph into a three-foot ‘Magnus’ if it self-seeds.  Leaving the seedheads for the birds sounds good in theory, but in fact those seeds promise many  unwanted plants.  And don’t forget that a weed is anything that grows where you don’t want it.

Which perennials to leave for winter interest depends on the taste of individual gardeners.  Certainly leave the sedum ‘Autumn Joy’ for its golden blooms, but even that begins to flop over.  I like to cut them back because sedum is the first perennial in my garden to emerge in the spring, sometimes as early as February.  The grasses are beautiful in the winter, with the dried plumes and browning blades moving gracefully with just a whisper of wind.  However, even grasses can create unwanted debris because they tend to break off and litter the garden.  Whatever you choose to do, be sure to cut grasses to about six inches before new growth begins in early spring.

There’s no avoiding the bane of every gardener’s life—weeding.  If you dig the root rather than merely pulling the foliage, you can save yourself many hours of weeding in the future.   In the frenzy of cutting and weeding, avoid pruning trees and bushes in the fall.  Pruning encourages tender new growth that will fall victim to the first killing frost and perhaps risk the health of the plant.

Of course, leave plants that keep their foliage throughout the winter, although it’s a good idea to clip the dead undergrowth that could rot in cold dampness and encourage disease.  Among this category are heucheras, hellebores, and arum.

In theory you can plant perennials whenever the ground is not frozen, but they really need time to begin establishing a root system before the chill of winter brings on dormancy.  Gardeners usually advise planting perennials in our zone after Easter and before Halloween.   Whenever you dig in your new babies, throw a little root stimulator at them to begin building a good foundation for vulnerable new plants.

Ah!  Now comes the crowning task, and the most rewarding one at that—mulching.  I like pine needles rather than shredded or chipped wood because it breaks down faster, is cheaper, and doesn’t encourage termites.  Whatever you use, remember that it provides a blanket for your garden from the most punishing temperatures, discourages weeds, and adds a beautiful, finished look.

So you’re done.  You have only to stand in your garden, again with arms akimbo, this time with satisfaction in the knowledge that all except the most cold-hardy sorts will be gathering strength during dormancy in preparation for the spring show. Then you can say, as did Robert Frost, “Goodbye, and Keep Cold.”

Like my favorite gardener-poet Robert Frost, I leave my winter garden to the vagaries of the season, knowing, “One thing about it, it must not get warm. . . [but] Something has to be left to God.”  To that I must add what someone else once said:  “Some say the world cannot be lost as long as it is touched by Frost.”  -FG 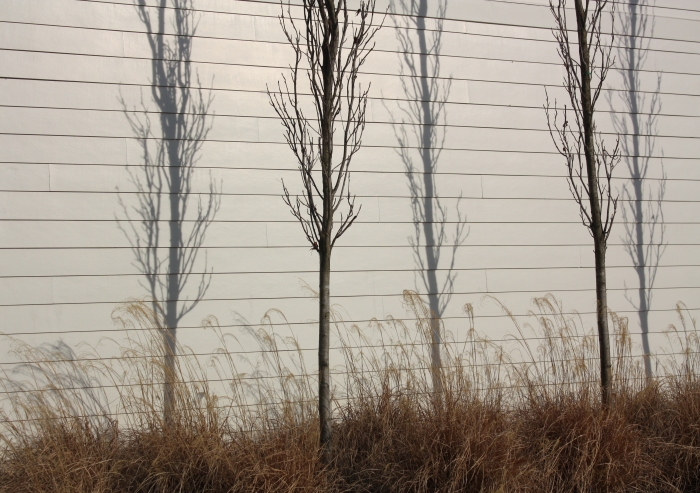 Grasses and gum trees in winter

One thought on “Guest Blogger: “The Optimist” (aka Faye Green)”