Manuel and Aida at Halcyart

Seven or eight years ago, I was thinking about my friends Manuel and Aida Terán, a wonderful couple from the indigenous Quichua region of Ecuador who travel to Nashville most winters to sell their handmade alpaca sweaters and scarves. They work very hard when they are here, standing outside for sometimes 10 to 12 hours a day in front of La Hacienda and at the Farmer’s Market, hoping to sell enough to educate their kids back home.

I also thought about my good friend J, whose paintings and pottery I admire, but who (at the time) wasn’t sure how to sell herself, how to get her work displayed at a gallery or coffeehouse. I considered my mom’s beautiful stained-glass art and my dad’s lathe-turned pens. And the idea struck me: “One thing I know how to do is throw a party.” Put the party together with the artists, I thought, and see what happens.

That’s how the idea for HalcyArt was born, back in 2002 or so. I saw it as a way for artist friends to show and sell their creative work, a seasonal gathering place for a neighborhood still in its pioneering honeymoon phase, and a fun way to convince people to bypass the malls and big boxes and patronize our creative friends and neighbors in the holiday shopping season. I figured I’d bribe people with food and wine, and buying would follow. Nothing major. It’s not exactly a new idea. But it kinda took off.

By the fifth and final HalcyArt a couple of years ago, five hundred people moshed through my and my intrepid next-door neighbors’ houses on the December night in question. More than thirty-five artists offered their work for sale, and the guests plowed through about seven cases of wine. Comedy flashes into my mind at times like these–in this case, an image from “Planet of the Apes, the scene where Charlton Heston gets hosed down in the ape prison in Planet of the Apes and screams hammily, “It’s a mad house! A maaaaaaad house!” And so it was.

HalcyArt is dead, long live HalcyArt. I loved it, but I can’t face 1,000 feet in my house anymore. The structure does not, technically, rest on a foundation. All that wine was getting expensive. What’s more, the artists who got their feet wet at HalcyArt (and thus learned that people will pay money for their work) do not need me anymore (if ever), and the established ones never did in the first place.

A lot of people still ask me about HalcyArt. They say it was a great idea and a lot of fun. I say it was an OK idea, an annual that self-seeds and multiplies with a little encouragement, but ultimately has a limited lifespan. A lot of ideas grow and multiply beyond the cultivator’s ability to control them. The profoundly bad ideas, the ones fueled by panic or ignorance or venality, proliferate like bamboo and destroy everything in range. Whose bright idea were credit default swaps? And who first thought to teach illiterate kids* that blowing themselves and other people up was a ticket to paradise? 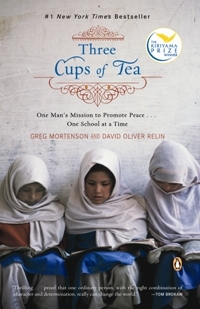 Unfortunately, the best ideas of all don’t always seem to spread like kudzu. They take longer to set deep roots, even longer to reach far and wide above the surface. It took Greg Mortenson more than a decade to gain the attention his work deserved. Through most of the nineties, he labored quietly at making relationships with ordinary people in remote Pakistani villages and helping them build secular schools there.

He wasn’t flashy. He wasn’t slick or media savvy, and he had no money. He was tired and rumpled most of the time. Mostly, he was too damn busy building schools to worry about what he looked like or who noticed.

Then came the New York Times bestseller. Mortenson never wanted all that attention, but he needed it. How else could he ever dream of raising the kind of money he would need to counter a parallel growth, one of a far more invasive and insidious kind? The proliferation of fundamentalist madrassas in the region, funded by millions of Saudi oil dollars, worried him. The idea that had become his life, which he’d already been acting on for years, finally found words: the best way to work against the rise of violent Islamic extremism in Pakistan and Afghanistan, to his mind, was to provide kids an opportunity for education. They wanted it; he’d seen that in the hundreds of villages he visited and thousands of people he’d met. And nobody was getting the job done…except fundamentalists with a dark and cynical agenda. And he is there still, building, building.

It seems to me that the people with the biggest ideas, the people doing a lot of the really important work in this world, are the ones you don’t notice. They’re the ones with the stained thrift-store t-shirt on, the ones who look harried and exhausted because they have so much work to do; because once you get the big idea, once you notice what needs to be done, there is never any rest.

Act Like a Grrrl camping trip with Vali last summer

I’ve seen that look. I see it when I visit my friend Jude at Renewal House, the amazing nonprofit she runs, which helps mothers with addiction problems get off the streets and make a home for their children. Most recently, I saw it in Vali Forrister’s weary-but-happy look last summer, during the busiest days of “Act Like a Grrrl,” an autobiographical writing camp for teen girls which she created a few years ago.

Check back next time for more about Jude and Vali and what they do in our community. And pick up a copy of HER Nashville in December to read my essay about my unforgettable (and ongoing) experiences with Act Like a Grrrl and my forever girl-crush on Vali.  -KG

*It has since come to my attention (in one of the studies cited in “Superfreakonomics”) that many suicide bombers are not illiterate. In fact, in the studies mentioned (statistics of Lebanese and Palestinian “martyrs”), they are on average better educated and from slightly more affluent families than the general population. Like Lenin, Trotsky, Pol Pot, and Che — some other guys who thought ideas mattered more than people.