I hadn’t planned on going to Angkor Wat this trip. 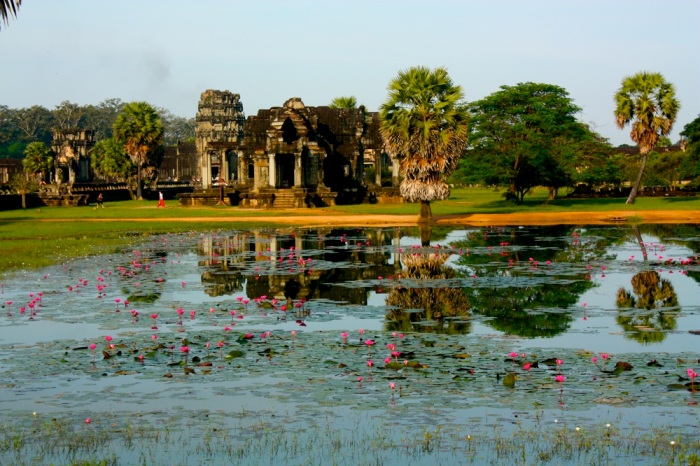 It’s a funny story, actually. My job in Cambodia was to spend 2 weeks shadowing Chantha Nguon, to begin research for a book about her life and work. Sneaking off to spend 2-3 days in Siem Reap wasn’t part of the plan. And then it came to pass that the incredibly energetic, wildly busy, and verging-on-overcommitted Chantha had a 3-day work trip scheduled with a cadre of government officials. In other words, full cars, meetings, and late-night “business karaoke” in a small-town bar.

No room for me amidst all the bureaucratic appearances and Elvis impersonations.

A young acquaintance of Chantha’s happened to mention that she and some friends were headed to Siem Reap for the weekend, and would I like to join them? I agreed. Only problem: I arrived at the agreed-upon meeting place 2 days later, and my new acquaintance was not there. A friend of hers appeared and said, “_____ couldn’t make it. She’s so sorry! Here’s your bus ticket.”

OK! Sudden mental phase shift. Travel across the country to Siem Reap on my own. Sure. Why not? Surely I could (gulp) figure things out once I got there. 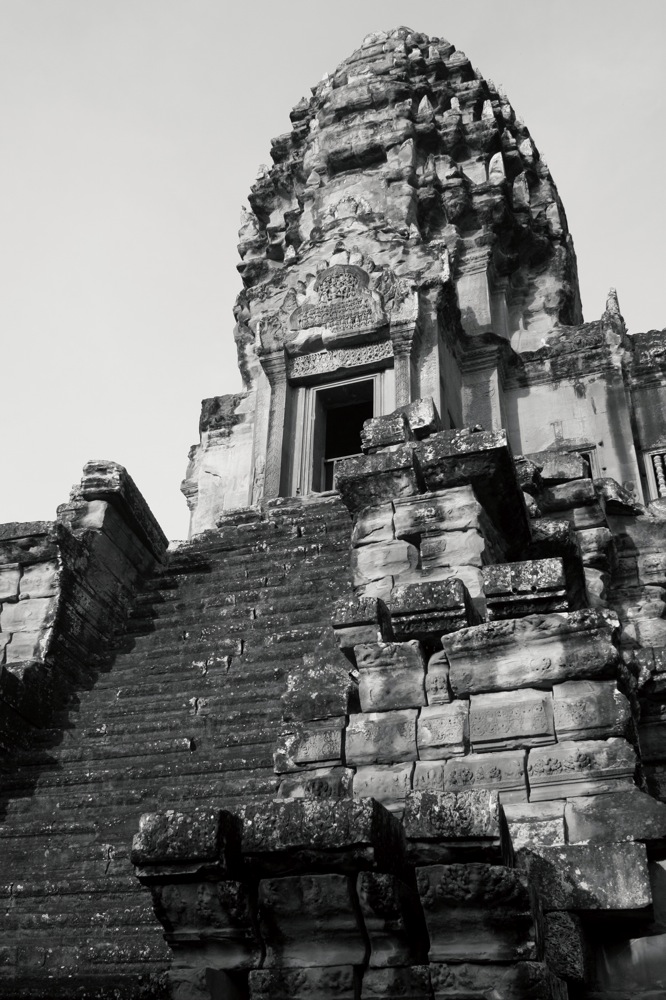 After a desperate study of the Lonely Planet Cambodia Guide on the 6-hour bus ride, I arrived in Siem Reap, my eyes like platters. It was dark, and the bus station was a scrum of passengers and tuk-tuk drivers negotiating rides to guesthouses. I had no idea where to go or what to do. To my great good fortune, ____’s friend (who’d brought me the bus ticket) strode up and asked if I’d like to share a tuk-tuk ride to her hotel. Why, yes. Yes, I would. Whew!

In the end, traveling across Cambodia by myself to spend a couple of days in Siem Reap was nothing like as big a deal as it initially sounded in my head that afternoon when I boarded the bus, all wide-eyed and rookie-backpackery. I rode a tourist bus full of tourists to a tourist city, and then I walked around Angkor Wat and took 2,000 photographs with all the other tourists. This was not a risky endeavor.

The Photo Everyone Takes at Angkor Wat

Not risky at all! That is, unless you count the following dangers:

3. Being run down by tuk-tuks or tour buses from Malaysia

4. Eating up all your data cards with blurry, mediocre photos that seemed so great while you were taking them 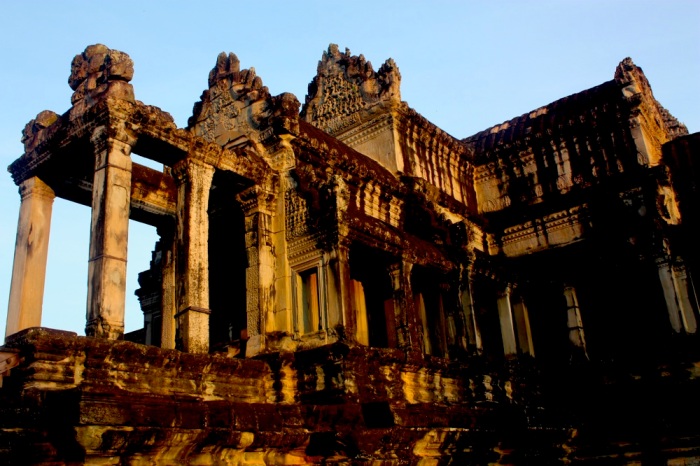 Why does it feel so scary sometimes to do a thing you haven’t done before? Where do I get the ticket? What if all the hotels are booked? Is that a SNAKE he is eating? If you’re not a Veteran Traveler, accustomed to not knowing what will happen next and being ok with that uncertainty, all those question marks bounce around your head, mimicking your mother’s voice at its most anxious and accusing. You don’t know what you are doing! the voice chides. You are going to be killed and eaten by dogs! And it serves you right.

Although the best travelers have gotten good at playing life by ear and remain generally unfazed by 8-hour border crossings, overly-attentive policemen, and other vagaries of moving from place to place, most people don’t particularly enjoy the sensation of not knowing the ropes…or worse, of feeling completely vulnerable because of that not-knowingness.

But then, vulnerability has its rewards. Time after time, some kind local will notice the mouth-breathing, the squinting at maps or 10,000 riel-notes, or some other sign of utter incomprehension, and will take pity, and step in to help. That’s what _____’s friend did at the end of our long bus ride. And I was rescued from a catastrophic Tourist Fail by a saintly tuk-tuk driver named Mr. Sey, who saved me from myself, and made my Angkor Wat experience perfectly unforgettable (that story coming next).

Suddenly, you’ve made a connection, and a memory. 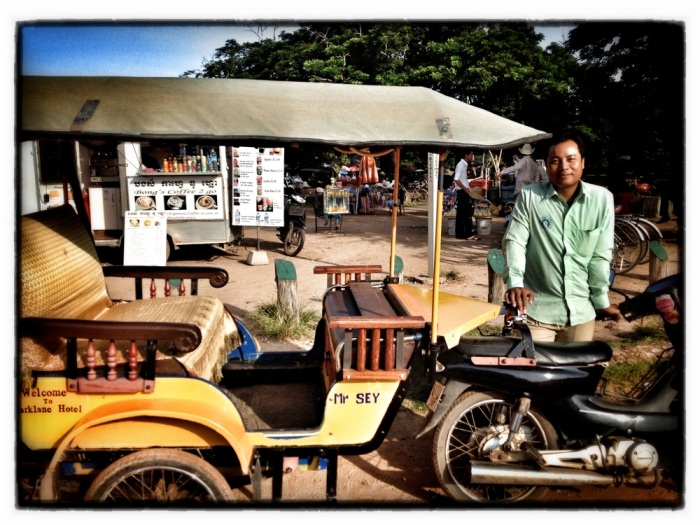 It’s been a long, long time since I was in a place where I could not talk to anyone. It took half a day just to understand the local currency and exchange rate (O MY GOD, this is a 10,000-something bill!), longer than that to grasp how to cross the street in Phnom Penh. And I still can’t reliably order a proper soup in the market.

I have a love-hate relationship with putting myself into situations of unavoidable cluelessness—like wandering into a dark, labyrinthine market warren “food court” and ordering a bowl of mystery, poured from a giant, steaming cauldron that’s simmering over an open fire. People stare, the dogs look twitchy and thin, and the soup may or may not be on the State Department’s Do Not list. 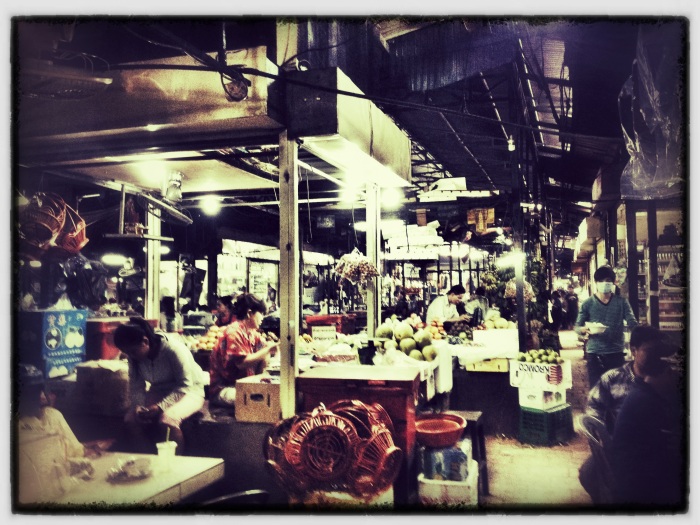 I hate that hesitant, “what do I do” feeling, and I go out of my way to avoid it most of the time—which is pretty stupid when you consider that there’s really no way to learn anything without playing the rookie and looking a bit silly in the process. The most rewarding experiences—love, travel, learning, trusting—come from choosing to be vulnerable.

The moral, for me? Choose vulnerability and cluelessness. Board the bus. Trust Mr. Sey. Order the mystery soup. Turns out, it’s delicious.

For more tales of tourist folly, see also How Not to Use the Loo.

10 thoughts on “Lessons from Cambodia: The Rewards of Vulnerability”