Last night I tore into CODE NAME VERITY, a fantastic new young adult novel by author and pilot Elizabeth Wein, and came across a passage so lovely, I had to stop and breathe and then read it again.

CODE NAME VERITY is the story of two young women who become best friends during the opening months of WWII. One mans a radar outpost, and the other, named Maddie, is a pilot. This passage describes Maddie’s last flight before Britain declares war on Germany, in which she explores the skies along the Northumberland coast in her final hours of utter freedom before war crosses the Channel.

She followed the coast north to Bamburgh and Holy Island…Maddie on fabric wings flew low over the long sands of Holy Island and saw seals gathered there. She flew over the great castle crags of Lindisfarne and Bamburgh to the north and south, and over the ruins of the twelfth century priory, and over all the fields stretching yellow and green toward the low Cheviot Hills of Scotland…

More than anything else, I think, Maddie went to war on behalf of the Holy Island seals.

Back on the ground, Maddie lingers in the cockpit and weeps for beautiful and doomed things.

Sometimes the sheer loveliness and truth of a tiny insight like the one above grabs you and shakes you, especially when it parallels something you’ve already been thinking about. For one, I haven’t flown recently, and Wein’s description of that Northumberland landscape in late summer had me missing my aviation life terribly.

And for another, I’ve been thinking a lot lately about the relative importance of things, about what’s worth fighting for, working for, and living for, about the things that make people happy, and the things that we think will give us happiness, but seldom do. Again, a book got me thinking this way—to be precise, Ben Fountain’s new novel, BILLY LYNN’S LONG HALFTIME WALK, which I read a few weeks ago. It’s a bitterly funny day-in-the-life story about a squad of soldier-heroes on a “victory tour” of America. 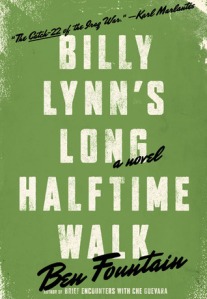 They spend Thanksgiving Day at a Dallas Cowboys game, being paraded around by powers-that-be with various agendas, and finding the whole experience utterly bewildering. In one scene, two soldiers amble through the gift shop, full of high-end Cowboys-branded paraphernalia that they can’t possibly afford. And in the passage below, one of the soldiers (Billy) observes the facile machinations of the multi-millionaire team owner (Norm)—a salesman, a product—and issues this musing on how America suddenly looks to him, a 20-year-old grunt fresh out of the Iraqi desert and soon to return:

If there’s a grating artificiality in the performance—Norm’s awareness of himself as performer…it’s no worse than any other fixture of the public realm. Billy has noticed that audiences don’t seem to mind anyway. All the fakeness just rolls right off them, maybe because the nonstop sales job of American life has instilled in them exceptionally high thresholds for sham, puff, spin, bullshit, and outright lies, in other words for advertising in all its forms. Billy himself never noticed how fake it all is until he’d done time in a combat zone.

There’s so much to love about America—a stunning array of landscapes, the openness of people, a certain belief in life’s possibility. But one thing it’s a bit harder to love sometimes is the artificiality Billy describes, the sense that everything and everyone is for sale at all times. And when I think about what home means to me, what I would most deeply miss about America if it were destroyed or I were exiled, and what I would kill someone to protect, it wouldn’t have anything to do with convenience, commerce, or comfort.

I would not weep for strip malls or pro football. I would not miss Americans’ predilection for seeking fulfillment in some arbitrary hierarchy of material gratification, for acquisition as unquestioned habit. We can’t seem to grasp that we find no happiness there.

We do find it in the darndest places. For each person, it’s different, and it changes every moment—that one beautiful thing that has the power to signify what’s real and essential about your life and about the place you love most (and maybe even hate a little bit) because you were formed there. It can be anything, or anyone.

For Maddie, alone and aloft on a late-summer night, it’s the Holy Island seals.

Recently, my friend Jason wrote a song called “Ordinary Day” that wonderfully captures this idea—that a single, simple image or thing can sometimes feel so impossibly profound. The lyrics are simple—a poetic litany of quiet moments that end up defining your life as you look back. I paraphrase:

Whenever he plays the song, I get a happy-tearful feeling like the one I had when I read the Holy Island seals line, a kind of Yes! That’s just what life is like! sensation that the very best poets and novelists and songwriters manage to evoke in just a few perfectly chosen words.

And it prompts me to ask myself: in the edited reel of my life, what are the images that wouldn’t end up on the cutting-room floor? I see a failed Thanksgiving pie, sitting on the ground with Mom and two trowels, scores of campfires, nervously watching Dad’s first solo flight from the tarmac, midnight on a sailboat, pulling staples out of an old wood floor, an otter swimming by my kayak, sprinting down a storm-wracked mountainside with Hal, a frisbee in the air.

I write this today to remind myself to seek more experiences like those, moments that would surely make the final cut.

8 thoughts on “One Beautiful Thing”