Some people think I’m a food snob because I tend to sigh when they invite me to Cheesecake Factory or Outback for dinner. I know, sighing is a bit passive-aggressive, and I really should learn to be more agreeable.

I don’t want to be one of those condescending food people who holds court about the evil of chain restaurants and fast food and waxes eloquent – at length – about esoteric food items they want you to know they love, from escarole to bún măng vịt (whatever that is).

I don’t actually need to impress anybody with an ability to discuss the relative merits of taro vs. turnip cakes or a willingness to eat kim chee in all its tasty, mouth-searing rottenness. I just sincerely do not enjoy dining in mall parking lots and Wal-Mart outparcels. Any restaurant that tries to offer me everything, from fajitas to chicken fingers and artichoke dip to pizza to some kind of glazed salmon entree, is most likely going to fail at most of all of the aformentioned. What’s more, most of the money you spend on the meal is going straight to Dallas or Charlotte instead of staying in your hometown, feeding your neighbors and friends, and encouraging local food artisans to create edible artistry right in your neighborhood.

#&$^! There I go again, ranting, and using phrases like “food artisans” and “aforementioned.” What next? Am I going to go all dreamy about the elegance of a range of aged sakes, or behave snottily towards people who genuinely prefer milk chocolate? I really don’t want to be that girl.

You know, that girl, the critic. The one who hates the plot-driven book you chose at book club, who visibly pities you for the 80s mix on your iPod, who rants about the utter abomination, to her mind, that is your SUV. The girl who enjoys feeling smarter than you because she is sophisticated enough to despise what you enjoy.

I’ve done those things. And subsequently felt stupid. But on turning 40, I’ve adopted a new outlook: love the things you love, and let everybody else enjoy whatever crappy variety of airport novel, pop tune, or corporate fern bar they prefer, in peace.

As far as food goes, I haven’t actually changed my preferences; I’ve just spent some time thinking about how to understand and explain them in a way that doesn’t come across as quite so snottified and rant-y. 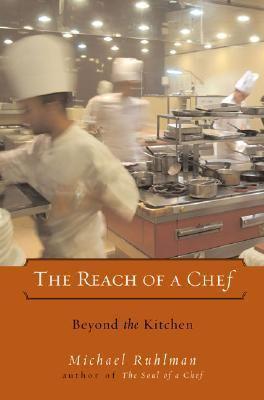 I recently read a book lent to me by the talented young Geoff Benson, who cooks at a nearby restaurant called Rumours, where I’m a devoted regular. It’s about chefs, this new wave of celebrity chefs and million-dollar branded chefs, and some of the most famous and storied chef-driven restaurants in the country: Thomas Keller’s French Laundry and Per Se, Masa Takayama’s Masa, Melissa Kelly’s Primo, and  Grant Achatz‘s Alinea–each one vastly different in style but similar in one key way: the chefs are completely obsessive perfectionists about their food, willing to work eighteen-hour days for decades on end for very little promise of fame and fortune, just because they love crafting beautiful food more than anything in the world.

I was telling a friend of mine about the book, and about how much I would like to, one day, eat at Masa and the French Laundry and Alinea, just once, despite a meal price that exceeds the average domestic airfare. She couldn’t believe it. “I would never do that,” she said, “when I can make perfectly good food at home for a lot less money.”

As that friend is a highly accomplished art photographer, I said that I can make perfectly good pictures with my camera. “But what you do,” I pointed out, “is artistry.” That’s why just once, I would pay $300 to try Atchatz’s wild edible sculptures, Keller’s perfectly crafted stocks and sauces, Masa’s obsessively assembled sushi, fresh from Japan’s shores. Because another word for “obsessive, workaholic, perfectionistic lover of the craft” is “artist.” Eating at those places is like visiting an exhibition or hearing Renee Fleming sing in person.  Put that way, my friend nodded. Art was a thing she could understand.

Although I revere the world’s great chefs, a recent roadtrip to Apalachicola reminded me, again, that food artistry comes in many forms. Hal and I checked into our hotel and had a stroll about town before our planned meal at the world-famous Boss Oyster, in a town world famous for its oysters. Instead, something made us walk into a place we’d never heard of, called “Hole in the Wall Seafood Market and Raw Bar.” It was the restaurant’s first night open, and we settled in to share a simply-prepared and delicious low-country shrimp boil and a bowl of gumbo.

Our new home in Apalachicola

It quickly turned into one of those nights. Owners Jeff and Debi Fletcher–the kind of people whose warmth and openness immediately puts you completely at ease–poured us a couple of glasses of complimentary white wine as an anniversary gift. The next thing we knew, the restaurant was closed, guitars were out, and we were singing Neil Young tunes with the Fletchers and their friends. I actually sang aloud, so people could hear – a rarity. Before the night was over, we’d come to feel quite at home there, as if we were among old friends, and Debi had even wrapped up to-go dishes of seafood casserole for us, without being asked, in case we got hungry again. I mean, who does that?

Moms do it. Grandmoms do it. And so does anybody else who feeds people out of love for food itself and the people it nourishes.

I wish I remembered more perfectly what Debi said that night about why she opened the restaurant, but then, of course, there was all that wine. She stated it so eloquently; what it amounted to was her personal philosophy, as seen through the lens of food. To paraphrase, she said that she loves to cook for people because food is an expression of caring for someone, and because a lot of the most important things in life get sorted out (or should) around the dinner table.

Even though I can’t remember her exact words, I do remember the feeling I had when she said them, something like, “Yes. Yes!!” That was it; that was exactly what I felt about eating, about restaurants, and about why Cheesecake Factory doesn’t work for me. Chain restaurants aren’t an expression of love or of artistry. They are an expression of moneymaking, which is necessary, I realize, if a bit cynical.

Thing is, I don’t want to eat cynicism and balance statements. I want to eat an artist’s genuine, sincere love of their work and of the warmth of experience it engenders. If you’re paying attention, you can taste the difference, just like you can see the difference between a Picasso sketch and a hotel room oil painting.

My epiphany that night was that Jeff and Debi Fletcher are artists. They love feeding people, because it gives the eaters, and the Fletchers, a moment of happiness (and the occasional epiphany). Judging from their cadre of fan-friends that night, they’re also fostering community, a metaphorical table around which important stuff happens. And they certainly gave us an utterly unforgettable night in Apalachicola, a memory that will make me smile every time I think about it.

Art is experience; it’s a play, novel, painting, song or meal that changes the way you think ever after. And it’s worth the price of admission every time, because nobody can ever take the experience away from you.

Now that I think about it, that’s how Hal and I wind up choosing our favorite places to eat: some combination of love and artistry exists there, from the food itself to the space that houses it and the personalities of the people who bring it forth. Geoff Benson’s burgeoning talent as a young cook, the journey of discovery he’s just embarking upon, is evident in the creative chef’s tasting menus he creates. 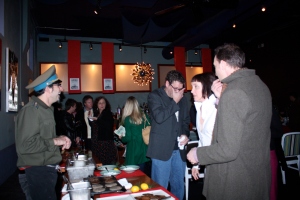 Mike D. at Mirror Restaurant making blini at the amazing book-release party they threw for me

And Mirror Restaurant, which has been our home-away-from-home for nearly a decade, is a mixup of the creativity of its parents, owners Colleen and Michael DeGregory, our dear friends. We spent many of the turning-point events of our lives there at the bar — bachelorette party, birthdays, anniversaries, a fabulous book-release party they threw for me without charging me (!)…And I’ll never forget the night we wandered in, desolate, the night of a young friend’s sudden death. “You must be starving,” said Mike D. “Lemme get you something.” I didn’t even know what I wanted, but he did, wordlessly bringing out a plate and setting it before me. I devoured it. It was delicious, and it made me feel better.

That’s love and artistry, at its best. And now that I’ve tasted it, I don’t want anything less.

8 thoughts on “On Food, Love, and Artistry”