A madcap obstacle race complete with fire, mud, and barbaric hordes can soothe a broken heart — if you happen to be mourning your former life as an athlete.

Anyone who’s ever played a sport long enough to get steadily worse at it has, at some point, come face-to-face with the body’s inexorable decline.

I’m not sure whether the decision to hang up my cleats forever was more or only slightly less agonizing than the final years of actually playing Ultimate Frisbee. Retiring caused injury only to the psyche; symptoms included fierce longing, a proliferation of stress dreams in which I’m late to a tournament and can’t find my ankle brace, and wondering whether my ex-teammates would miss me on the field. 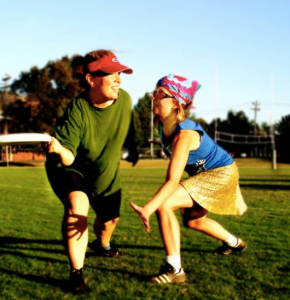 Whereas the pain of playing a balls-to-the-wall, pounding, sprint-heavy team sport at an advanced age began with the purely physical: gnawing knee aches and neck spasms, post-play soreness that endured most of a week. But there was non-corporeal suffering, too: the ego-annihilating sensation of getting dusted by coltish, untrammeled girls who’d never heard of Gilligan or The Cure; the understanding that this tendency would only accelerate, much unlike my unresponsive fast-twitch muscles; and the stark realization that the reality of myself had diverged from my mind’s image of myself, in which I’m as fast and strong and immune to hangovers as I was at 20.

I understand the undignified and comedic wafflings of Brett Favre, I really do. If, like him, you can’t remember a time before they started calling you The Athletic One, before you could hit first base with a glove-burner from third or juke a tackler so hard she stepped out of her shoes, then you’ll understand how existentially taxing it is to imagine yourself as anything other than quick and lithe and fully at home in your body. And for elite athletes, there’s a surpassing beauty in those seemingly impossible feats of physicality, like when Michael Jordan hangs in the air, as David Foster Wallace put it (in his magnificent essay on Roger Federer), “a beat or two longer than gravity allows.”

I was not one of those athletes. By any stretch. But after 30 years of leaving skin and sweat on diamonds, fields, and ball courts, I’ve had a few metaphysical moments when I could almost imagine the world through the raptor eyes of those super(wo)men. I once played a high school basketball game where I felt, eerily enough, like I could reach a long, rubbery arm up and place the basketball into the hoop, easy as sliding a dime into a piggy bank. For a magical hour, I couldn’t miss.

That feeling never came back. But I’ve spent two decades trying to find it again, or at least something like it. And I’ve known many pleasures in the seeking: slicing a Frisbee into the wind so that it curves perfectly for 40 yards, right down the sideline and into a sprinting teammate’s fingertips. That sunburned, delicious exhaustion after four games, dust melding with sweat on the skin. My Frisbee women’s exultant faces as one of us dives for a disc in some muddy end zone in … Tampa? Cincinnati? Savannah? Those sunlit fields of my 20s and 30s bleed together.

When the growing catalogue of aches and surgeries signals the end of all that, the decades suddenly seem to tear loose from above you like a rockslide and pile on catastrophically, in a way that gradually finding a few crow’s feet winking at you in the mirror does not. And so it happened when I was 40, about a year after I’d formally and for the final time announced my Frisbee retirement, after all the press conferences were over and the lights dimmed, that I started casting about for what to do next with my lungs, arms, and legs. I wasn’t quite in my water aerobics years yet. I still craved frenetic activity and adventure, and surely, was still capable of some version of it.

Which is the only possible explanation for why I let my husband Hal talk me into signing up for a crazy three-mile foot race called the Warrior Dash, rife with boot-camp obstacles, fire, and rivers of mud. And costumes.

It all started when the Insanity DVDs arrived in the mail. Hal’s idea was to do the 60-day Insanity workout program (As seen on TV! Get yours today!) so as to turn our bodies into well-oiled, rippling machines just in time for the race in May. On a Monday morning in mid-March, two months after my 40th birthday, we laced up our sneakers and naively slid DVD #1 into a laptop.

“Get ready to dig deeper than you ever have in your liiiife!” shouted Shaun T., the ripped-to-shreds celebrity trainer who emcees the Insanity workouts, backed by a chorus line of flawless physical specimens who sweat extremely attractively.

Day one was, in theory, just a warm-up: a fitness test in which you perform eight innocuous little exercises for one minute each, getting in as many reps as you can, as a baseline against which to measure future excellence. How hard could eight minutes of exercise be? We grinned at each other as we launched into 60 seconds apiece of switch kicks, power jacks, push-up jacks, suicide jumps and much more.

I want to stress here that I did not cry. I wheezed. I dry heaved. I pressed my knees and forehead into the floor as my chest shook silently, a motion that may have resembled weeping, but most definitely was not.

If you happened to stroll by our yard on any afternoon in March, April, or May of 2010, you may have witnessed a series of such moments: 40 to 60 minutes of escalating jumps in different configurations, ramping up to a torturous maneuver in which you alternately do pushups and leap into the air, followed by a time of lying prone and dry-sobbing.

(On certain days you might have heard Hal or me crying out and/or shouting, “#$%@ YOU, Shaun T!” at a tiny laptop screen. If you did stumble upon this scene, I hope you had the wisdom to fix your eyes straight ahead and quicken your pace.)

The only aspect of Insanity, week one, that made that unadulterated hellscape of pain endurable was that occasionally, even the rock-hard video people gave up. Or at least pretended to. And lay on the gymnasium floor looking beaten.

I’ll spare you the Biggest Loser-style makeover stats; suffice it to say that by week three, I had become an intolerable dinner companion. I was manic. Insanity was all I could talk about. And like the newly converted everywhere, I did not notice people glancing at their watches as I chattered on and on about how fantastic I felt, and how very much I had come to enjoy the digestive properties of flaxseed. Did I mention Insanity program’s special nutrition guide? I did? Oh, you have to go now?

As it turned out, Insanity prepared us extremely well for doing the Insanity workout itself. But we were completely unprepared for the Warrior Dash, a gauntlet of Marine-style barriers that snaked 3.2 miles through rolling and rural Northeast Georgia. That springtime Saturday afternoon, we mustered beneath a cruel Southern sun amidst a seething barbaric horde, resplendent in Braveheart tartans, superhero underoos, Mad Max chrome-and-pleatherwear, and candy-colored tutus.

Our ragtag battalion of mercenaries surged past a starting gate — which, aptly, emitted plumes of fire — and launched an assault on the terrain. I set my sights on Hal’s gold sequined skirt glittering just ahead, and we soon began engaging obstacles: a shallow lake and a morass of muddy tires to slog through, rusted cars and a cargo-net wall to scale, fires to leap, and the coup de grace: a mudslide into a neck-deep quagmire of viscous ooze with barbed wire above. The horror.

Amidst those unclean legions, we staggered across the finish line onto a vast plain of assorted soldiery. Squeaky-clean clean greenhorns eyed us anxiously while we mud-encrusted veterans cried out in full-throated exultation, gnawing Valhalla-sized turkey legs and swilling tankards of beer. And there it was, the feeling I’d always get at the end of a long day of Ultimate: Battle-weary. Bruised. Filthy. Wild with adrenaline-fueled, youthful exhilaration. Hal and I pulled on our new fuzzy Warrior helmets festooned with foam Viking horns, and together we plundered and pillaged our way through the afternoon. We took no prisoners.

And I realized, I’m not done. I’m still Kim the Somewhat Athletic One, who’s not afraid to sweat profusely or hit a puddle of mud full-bore and belly-first. (OK, maybe a little afraid.) And although I love that leave-it-all-on-the-field feeling, all skinned knees and exertion, it’s really about just going outside and playing, at whatever level of intensity an aging body will permit, with somebody whose company you enjoy. Veteran Frisbee womenfriends, Hal, whoever’s up for it. I figure I can do that for a few years yet. Just like my dad did, shooting hoops with me well into his 40s — which, come to think of it, is how I got this way in the first place.

*Next adventure: A daily yoga practice, and a few very long walks across Northern Spain.

A version of this article originally appeared in the now-defunct HER Nashville magazine.

Overwrought battle metaphors and mud & fire photography first appeared in my 2010 story on the Warrior Dash, which aired on NPR’s Only a Game.

Interviewing non-PC warriors for NPR’s Only a Game

One thought on “A Player’s Gotta Play”