A Guide for Wary Pilgrims

Étape 2: Adorable villages, sheep, and the agony of the feet

You wake to an astonishing sensation in your feet and legs. Rise and perform your first Pilgrim Zombie Walk—tiny steps on tenderized soles that refuse to flex.

There is mud all over the room. It is still early enough in the journey that you actually care, and go to lengths to avoid standing in it. This will seem hilarious by mid-May, when you are sloshing through rivers of greenish mud-manure in Galicia.

You have not yet achieved maximum efficiency re: packing. This will come. Meanwhile, take an excessive amount of time to re-organize your things into small baggies and even smaller sub-baggies. Be grateful you decided to splurge this first night on a double room…because your possessions have occupied every square inch of mud-slicked floor space.

The socks, shorts, and tights you hand-washed yesterday are not dry, as such. Diaper-pin them to the outside of your backpack like a good pilgrim and proceed.

Notice that the highway sign in Roncesvalles reads, “Santiago de Compostela 790.” You cannot fathom why it would do this, when the guidebook (and various mile markers) clearly stated, “790km to go” at the beginning of your trek yesterday. Just like that, a full-day’s efforts nullified by taunting road signage—clearly, a touch of local humor. Those zany Basques!

New sensations: A muffled forest path, the aroma of pastureland, your pre-oiled Tinman stride clanking along the undulating Navarrese landscape. Looking back, you will note that your photography today is decidedly ovine in nature. By Galicia, you will become somewhat less amazed by livestock…(SPOILER ALERT) unless it is bearing down on you hard and fast on a narrow trail.

More new sensations: Jostling with fellow peregrinos at a steamy café in  Burguete, the unbridled delight of hot café con leche warming your hands on a misty morning after an hour’s walk, the slow march of stone villages scrolling by at a pilgrim’s pace. Chorizo sandwiches for breakfast. The friendly exchange of Vitamin I (Ibu) and Compeed among new friends. The pulse of a thousand footfalls, and the still-novel disbelief of Being Here. 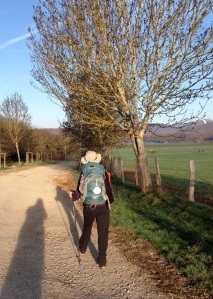 Order drinks and almonds at the beverage truck parked by a highway crossing. Chat with the German pilgrim who, judging by aroma, began his walk somewhere in Central Europe. In another week, you will be unable to distinguish other-personly aromas from your own peregrine bouquet.

A Korean woman wearing a Cambodian peasant hat with a giant brim (and who said bizarre and incomprehensible things to you in a previous village) is gesticulating violently at the beverage truck vendor. He beckons you over. What we have here, it seems, is a failure to communicate. Your high-school Spanish is not impressive, but it exists. “Ask her if she wants a tomato or a beverage,” he says. “I can’t tell if she is saying ‘tomate’ (tomato) or ‘tomaré’ (I will drink).

She is saying “tomate,” you gather, as she stabs a finger in the direction of her ham and cheese bocadillo and demands that some type—any type—of produce be added to the sandwich. This being Spain (arguably), and thus, not exactly a vegetables-on-the-sandwich kind of place, break the news to her that there are no tomatoes on hand. She is displeased, but for the moment, the situation is defused.

Retreat to the picnic table. As you bid farewell, grasp that the German peregrino is basically penniless. Leave your almonds on the table, as if you don’t care to finish them. Smile as he slides the baggie toward himself.

This afternoon, on a sun-soaked small-town square where two small girls play soccer with a rainbow-colored ball as the town abuelas look on, you will write the following in your journal:

Lessons? It’s going to be harder than we thought. It might be easier for me than for H, if only at first. Find ways to help him when he hurts & gets tired and grumpy. He wants to “succeed,” whatever that means. He wants to be happy.

At this point in the day, stop asking H how he’s doing. You already know the answer. Hobble with him into Zubiri, marveling at the hardy souls (& soles) who press onward to Larrasoaña. Check into the private albergue (Zaldika) and chat with the friendly owner in your slowly reawakening Spanish. Implement her advice regarding the healing properties of the río Arga.

Indecision will not be a factor this afternoon: There is one bar in town, as far as you can tell. The barman delivers you a wall-eyed glare when you greet him with a chirpy “¿Cómo está Usted?” You do not know whether this is because he prefers to speak only Basque or because it is considered bizarre in Navarra to ask a stranger how he is doing. Do not repeat the question.

Your momentary chagrin dissipates when you pay 1€ each for your glasses of vino blanco. The barman closes the bar and disappears for a few hours. Peregrino, please meet siesta. Relax! You may order another vino after 17:00, or maybe 18:00.

The afternoon is a glorious watercolor wash of angular sunlight, gossiping abuelas, river burble, and peregrino companionship. The raucous Aussie-lady contingent drinks and hikes on; you chat all afternoon with two solo-traveler Australians and a polite Frenchman whose walk began in Paris.

One of these new friends  you will not see again after today. The other two will play large and vital roles in your Camino story, and perhaps, you in theirs. But there will be no way to know this until well after Pamplona.

At this evening’s pilgrim dinner, you learn that not all food in Spain is delicious, as previously presumed.

Your first albergue night. moral: It is entirely possible to sleep blissfully through an unimaginable volume of  elderly-pilgrim snoring and flatulence.

abuelas—Grandmas; the staid matriarchs of Spain, whose stone-etched smiles warm you on your Way; keepers of Cathedrals, sweepers of cobbled streets. *note: When an abuela stops you to chat, you will have plenty of time for her.

Compeed—Your ticket to happiness; second-skin blister miracle preventive. *note: Not sold in the U.S., presumably because no one walks here.

ensaladilla rusa—Russian salad, sort of. Mayonnaise and potato are heavily represented in this dish. Russian pilgrims express bewilderment as to the alleged point of origin of this salad.

Navarra—Navarre; a Basque-speaking autonomous region in northern Spain; a place where there are no “tapas.” (see: pintxos)

siesta—Those magical afternoon hours when the population of Spain melts quietly away and does secret things indoors; conveniently, that portion of the afternoon when you drag into your destination, craving immediate sustenance, only to find that everything is closed.

tomaré—I will drink. (Yes, you will!)

vino blanco—White wine; notice from yesterday that “red wine” is not vino rojo, but vino tinto. Do not attempt to understand why this is.

vitamin I—Ibuprofin; considered a hard currency on the Camino; known also as “I-candy.”

A Pilgrim’s Progress (essay from the Nashville Scene)