As a follow up to the previous post, here’s a 2009 essay I wrote for the now-defunct HER Nashville magazine, about the sheer amazingness of the Act Like a Grrrl writing/performance camp for girls age 12-18.

Oh, and you should probably donate. Right now.

The Fates usually arrange their serendipitous witchery during those lonely expanses of time, in some dismal hotel bar or an overnight train across Eastern Europe. Suddenly, you find yourself engaged in intimate conversation with a couple of strangers a few seats down, as if you’d known them all your life. And it’s a conversation you never forget.

For me, it’s happened at a Cleveland airport bar in 1992, a cave-like kebab place in Jerusalem’s labyrinthine Arab quarter in 1989, and the bar at Rumours one quiet weekday night a couple of years ago.

My husband Hal was traveling, so I headed to Rumours alone for dinner at the bar against a cozy and familiar backdrop of human activity, happy to lose myself in a book and a glass of wine.

Instead of reading, I wound up exchanging stories well into the night with a kind-hearted, middle-aged man at a terrible turning point in his life, and a woman named Vali, who wore a glorious fall of curly, red hair and a laugh that rose and tumbled like firelight. One glass of wine morphed into three or four. By evening’s end, the man had managed to surreptitiously pick up the entire check before bidding us farewell, an enormously touching gesture. And I had developed a massive girl-crush on Vali Forrister.

I can’t say whether it was our similarities or our differences that fascinated me more. She’s an actress, and I am a pilot, comfortable in the air but terrified of the spotlight. Both of us have spent significant time in Belize. I suppose you could say we’re both creative types — her medium the theater, and mine the written word.

But the thing that really set her apart to me … the phrase that kept flashing across my mind was, “Here is a woman who makes things happen. Here is a person with vision.” Co-founder of the innovative local theatre company, Actors Bridge Ensemble. Major player in bringing The Vagina Monologues to Nashville. And creator of an autobiographical writing camp for teen girls, a program called Act Like a Grrrl. 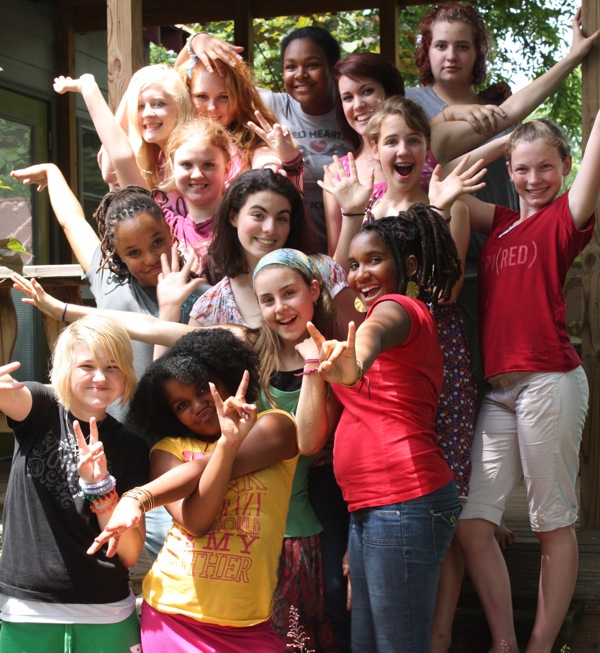 “I want you to come and speak to the girls next summer,” she told me that wine-soaked night. “Speak” to the girls?! I thought. Uh-UHHH. I want to BE one of the girls. Who wouldn’t? Imagine it. For a month in the summer, you spend your days in creative ecstasy, writing deeply personal essays about all sorts of topics, reading your words aloud to a group of supportive friends who are not allowed to criticize, but can only listen and cheer you on and rub your shoulders if you cry. Sometimes an African dance instructor or sword-fighting master or songwriter stops by and leads an enthusiastic session of something fun that you’d never try otherwise.

“Um, sure,” I stammered, feeling flummoxed and nervous. “I mean, what would you want me to talk about?” My acute stage fright reaches giddy heights when confronted with teenagers. They are divining rods for pretense and insecurity. I was sure the girls would see me instantly for the fraud that I am, an uncertain adolescent girl inside the finely-lined skin of a 38-year-old woman.

“I just want them to meet you,” she said. “Tell them about being a flight instructor and a radio producer and going to Russia and everything you do. I want them to see what kind of lives are possible for them.” By the time Vali had finished buttering me up, I felt almost … cool.

I found myself entirely caught up in their world, a clique-free, gossipless place where young girls get to…take creative risks without fear of ridicule.

On a sparkling June afternoon, the nine Act Like a Grrrl (henceforth, ALAG) campers burst into my back yard, a burbling current of jubilant teenage girldom. After consuming vast quantities of sandwich material, the girls read aloud essays they’d written, as I silently pointed a microphone — a project in the tradition of NPR’s “This I Believe” series. I listened in wonder to their eloquent pieces, about taking care of younger siblings and a fascination with butterflies, about sports and dance and recurring illness.

It was just one of several miraculous days I spent with Vali and “her girls” — the campers and co-leaders who, together, make up the ALAG magic. The girls’ exultant openness and sincerity immediately melted my fears, and I found myself entirely caught up in their world, a clique-free, gossipless place where young girls get to be entirely themselves, to leave all worries about weight and appearance at the door, and to take creative risks without fear of ridicule.

Every time I left the ALAG space for the day, I noticed a certain thickness rising in my throat, that verklempt feeling I always get at the end of It’s a Wonderful Life and whenever I see young girls as happy and carefree as they deserve to be. I hoped I’d be invited to help out again a year hence.

However, the email from Vali the following spring contained not an invitation, but the terrible news that one of the campers, Cyan, had died after a series of heart transplants. I recalled her essay best of all, a witty and articulate piece about constant visits to the hospital throughout her childhood, the result of a congenital heart defect.

In June, I returned to find Cyan’s presence more palpable then ever. I’d agreed to help out with another project that summer and also an overnight camping trip to Center Hill Lake. The girls took turns sharing reminiscences of Cyan around a solemn campfire, some of them speaking directly to her before offering their private written messages to the fire. The recollections seemed to cast both shadow and light — her friends spoke of missing her terribly, of a sort of survivor guilt, but also of Cyan’s inspired storytelling, her wit, her arty sense of style. Her influence, it was clear, would endure. And it was equally clear that this summer, these girls would need the nurturing cocoon of ALAG more than ever before.

I settled into my sturdy backpacker’s tent early that night, the sounds of girl chatter and crackling fire soothing me to sleep. I awoke briefly an hour or so later to sheets of rain assailing my tent and the gleeful screams of girls. I smiled at their frenetic raindance, an expression of sheer, youthful joy, and fell back to sleep. A rather verklempt sleep, I should add.

I saw the girls again at the closing performance that ends every camp session, a mix of song and choreography interwoven with excerpts from the their best-written pieces of the summer. Wonder, admiration … awe is the word for what I felt as I watched those young girls raise their clear, confident voices to share sad and harrowing and bitterly funny personal stories with us, the utterly rapt audience. One girl spoke of a great city growing and humming within her — her emerging adult self; another envisaged her friend Cyan in a swirl of slowly settling autumn leaves.

Like the majority of the audience, I made no attempt to stifle the weeping that ensued — especially after the show, when the young stars not only allowed me to bask in their reflected radiance, but actually acknowledged me, with hugs and effusions of affection. I was now deeply and hopelessly smitten with the fearlessness and brilliance of these burgeoning young artists and women, and with ALAG itself, the miraculous, tangible expression of Vali’s vision, in its hour of triumph.

In that moment I lost my ability to say “no” to Vali Forrister.

I have a feeling she knows it, too. A few weeks ago, I got another one of those “How’d you like to … ” emails from her that always signal the beginning of an adventure of some kind. Turns out she’s leading an ALAG workshop at the Tennessee Prison for Women this semester, and she was wondering if I could help out with a writing and recording project.

Of course I could, and did. But that’s another story.

2 thoughts on “For the Grrrls”