I’ve loved Orwell’s journalism ever since I discovered Homage to Catalonia, and then devoured every book, article, and letter of his I could find. Now, I’m enjoying his wartime diaries, which The Orwell Prize has been blogging since 2008, 70 years to the day after Orwell wrote each entry.

A couple of things always struck me about Orwell’s writing: First, he explored an argument from all sides and tended to devote more energy to dismantling the “smelly little orthodoxies” of his own camp than to attacking the opposition. Make no mistake: Orwell was decidedly a Socialist, although he tended to define it on his own terms, i.e. justice and liberty, common decency (his words).  And this: “I want a civilisation in which ‘progress’ is not definable as making the world safe for little fat men.” Vague, but colorful and memorable. 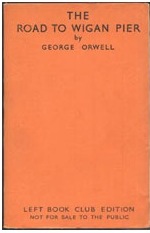 BUT. He openly ridiculed the more absurd iterations of the left in his own country and refused to become a partisan apologist for the so-called Socialism of the Bolsheviks. He could wax pretty grumpy when his rants got going strong, as you’ll see in this excerpt from The Road to Wigan Pier, his 1937 exposé of working-class poverty in England’s industrial north. It’s quite funny and cranky, full of stereotypes that still ring familiar:

“We have reached a stage when the very word “Socialism” calls up, on the one hand, a picture of aeroplanes, tractors, and huge glittering factories of glass and concrete; on the other, a picture of vegetarians with wilting beards, of Bolshevik commissars (half gangster, half gramophone), of earnest ladies in sandals, shock-headed Marxists chewing polysyllables, escaped Quakers, birth-control fanatics and Labour Party backstairs-crawlers. Socialism, at least in this country, does not smell any longer of revolution and the overthrow of tyrants; it smells of crankishness, machine-worship and the stupid cult of Russia…as with the Christian religion, the worst advertisement for Socialism is its adherents.”

At moments, that sounds a bit like something modern political commentators might say, except when you remember that he’s making fun of his own side. 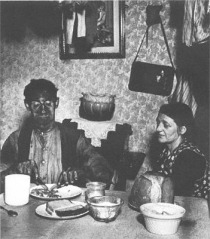 A Miner & His Wife

Second, he was willing to consider his own prejudices and how they influenced his opinions—to great effect in The Road to Wigan Pier, in which he writes at length of his bigotry towards poor people (which at times bordered on revulsion). In this passage, he’s screwing up his courage to enter a working-class lodging house:

“It seems ridiculous now. But you see I was still half afraid of the working class. I wanted to get in touch with them, I even wanted to become one of them, but I still thought of them as alien and dangerous…”

The most fascinating aspect of Wigan Pier and the above passage, to me, is that he’s not only willing to confess his preconceived notions and fears; he’s eager to confront them by learning about a class of people almost wholly unknown to him. He spent time with miners’ families in Northern England, went into the mines, lived for months at a time among the London homeless and the plongeurs of Paris. He worked as an Imperial policeman in Burma (a job he hated and which shaped his opposition to Empire) and fought Fascists in Spain (which revealed to him the true nature of Soviet rule). Who of today’s political talking heads would go to that kind of effort to openly question his own assumptions, would challenge them by going out into the world and learning about other people? Can you imagine any of them criticizing idiocy and inconsistency in their own political camp?

Orwell was willing to change his views based on experience, and even to seek out experiences that might re-shape his beliefs—an astonishing sort of open-mindedness that seems to have gone extinct in political discourse of late, and even in ordinary households. In America today, an individual’s beliefs about the science behind global warming or evolution, or what caused the present economic downturn, or whether income disparity is on the rise, or whether racial discrimination happens in our justice system—all seem to depend far more on the political trend of the moment than on, say, actual evidence. And the fewer facts a person knows, it seems, the stronger his belief. 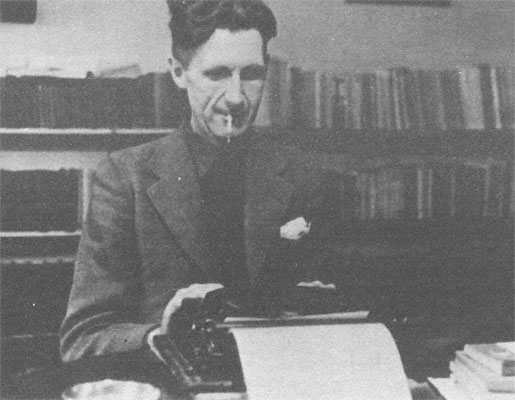 Which brings me to Orwell’s diary entry of June 11, 1942. The Nazis had just announced to the world that they’d eradicated the Czech village of Ladice—murdered the men, sent the women to camps and the children to be “re-educated,” and razed the town—for allegedly harboring the assassins of S.S. Gen. Heydrich. Here’s Orwell:

It does not particularly surprise me that people do this kind of thing, nor even that they announce that they are doing them. What does impress me, however, is that other people’s reaction to such happenings is governed solely by the political fashion of the moment. Thus before the war the pinks believed any and every horror story that came out of Germany or China. Now the pinks no longer believe in German or Japanese atrocities and automatically write off all horror stories as “propaganda”. In a little while you will be jeered at if you suggest that they story of Lidice could possibly be true. And yet there the facts are, announced by the Germans themselves and recorded on gramophone discs which no doubt will still be available. Cf. the long list of atrocities from 1914 onwards [German atrocities in Belgium, Bolshevik atrocities, Turkish atrocities, British atrocities in India, American atrocities in Nicaragua, Nazi atrocities, Italian atrocities in Abyssinia and Cyrenaica, red and white atrocities in Spain, Japanese atrocities in China, in every case believed in or disbelieved in according to  political predilection, with utter non-interest in the facts and with complete willingness to alter one’s beliefs as soon as the political scene alters. 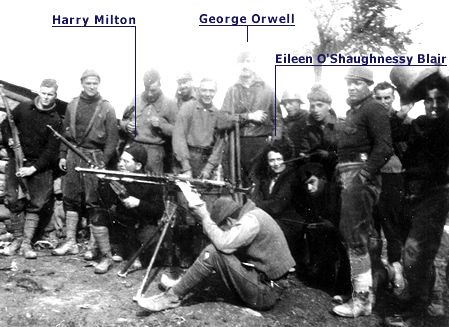 I’ll end with one of my favorite Orwell passages, from his essay, Looking Back on the Spanish War:

“…unfortunately the truth about atrocities is far worse than that they are lied about and made into propaganda. The truth is that they happen…There is not the slightest doubt, for instance, about the behaviour of the Japanese in China. Nor is there much doubt about the long tale of Fascist outrages during the last ten years in Europe. The volume of testimony is enormous, and a respectable proportion of it comes from the German press and radio. These things really happened, that is the thing to keep one’s eye on. They happened even though Lord Halifax said they happened. The raping and butchering in Chinese cities, the tortures in the cellars of the Gestapo, the elderly Jewish professors flung into cesspools, the machine-gunning of refugees along the Spanish roads — they all happened, and they did not happen any the less because the Daily Telegraph has suddenly found out about them when it is five years too late.”

“They happened even though Lord Halifax said they happened.” Favorite. Quote. Ever.

exercise: Replace “Lord Halifax” in the above sentence with your own least-favorite politician of the moment. Then, in lieu of the aforementioned “atrocities,” substitute something you’re ideologically doubtful about, all evidence be damned. How do your beliefs stand up? Show your work.

7 thoughts on ““Utter Non-Interest in the Facts”—Orwell On Truth vs. Ideology”