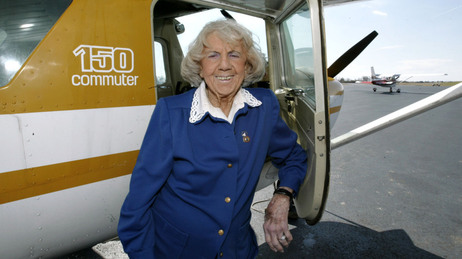 Johnson, known as “Mama Bird” to the thousands of pilots she trained and tested, logged more time airborne than any woman in the world and more than all but one living man. Although pilots measure flight time in hours, Johnson’s flying experience could better be tallied in years—57,635.4 hours comes to more than 6 1/2 years in the cockpit, much of it spent teaching students to fly and giving FAA flight exams. Johnson once estimated that she instructed 3-5,000 pilots and gave 9,000 check rides. She also managed the tiny Morristown, TN airport for nearly half a century.

I met her there one day about eleven years ago. A student of mine needed to fly to East Tennessee, so we did a cross-country lesson to Morristown (KMOR). I had a few hours of wait time on the ground, and I ended up in Johnson’s office, as she regaled me with tales of engine-out emergencies, befuddled students, and flight exams gone wrong. It was a marvelous afternoon, and her storytelling utterly transfixed me.

Then a young flight instructor, I idolized Mama Bird, in her early nineties at the time and still instructing, a few years before glaucoma, hearing loss, and an auto accident grounded her for good. Johnson was everything I wanted to be—an adventurer who chose a life’s work and stuck to it, evangelizing her love of flight to all who would hear and see and try. “I love what I do,” she told me in a phone interview a couple of years ago. (And by “phone interview,” I mean a comedy of shouted questions and WHAAAT?s until I finally gave up and relayed the question through an airport employee.)

That’s the best epitaph I can imagine for Johnson—joyfully doing a fairly ordinary job for so long, day after day, that it becomes extraordinary. Because to us aviatrixes, piloting while female isn’t an extraordinary thing. It’s just what we do.

Granted, it may be uncommon. (Only six percent of U.S. pilots are female.) But we women who fly for work or pleasure don’t see ourselves as oddities or usurpers (despite the very occasional silly comment from foolish and unenlightened fellows). We just prefer our offices and playgrounds to be at 1,000 feet AGL or higher. And for us, “Mama Bird” Johnson made that choice seem wonderfully possible, and extraordinarily everyday.

Blue skies and tailwinds, my friend.

Listen to a remembrance on NPR.