Where Hal and I sat together, with friends, on so many lovely nights, there now sits a bulldozer. 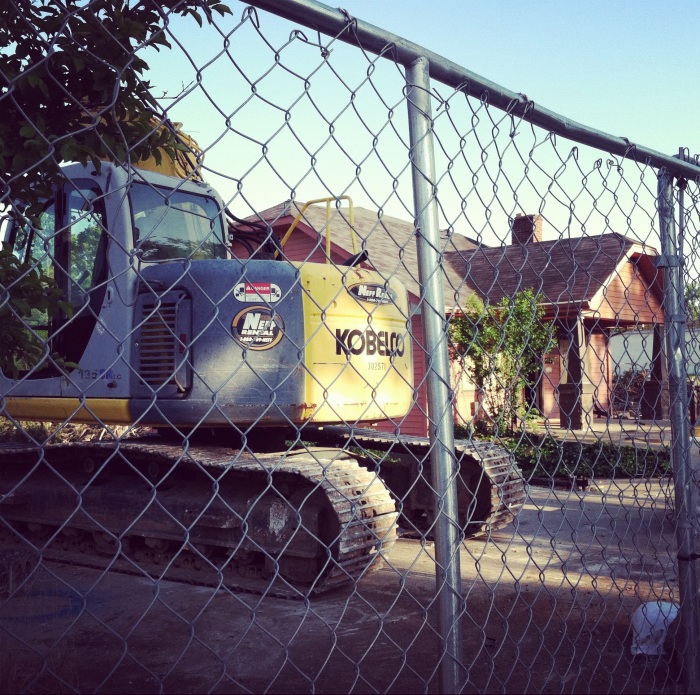 Rumours 12South is gone, a pile of rubble, a memory.

It was a jolt to drive by there a few minutes ago. Tonight is just the kind of beautiful, chilly night when our little urban tribe would converge on the Wine Bar’s west-facing patio, sipping tempranillo and watching the sun sink low. We’d probably build a fire…and this past winter, when we knew our ship was sinking, we’d bust up a chair or break off a few fence boards to fuel the flames—a touch of gallows humor, a dash of irreverent rule breaking to make us feel a little less impotent in the face of the destruction ahead.

If you’ve never fallen in love with some little watering hole, it may be difficult to understand why people might mourn at one’s passing. I probably won’t be able to explain it to you. To start, you might try doing a little background study: read The Tender Bar, J.R. Moehringer’s memoir about his hometown pub in Long Island. That pub raised him; it laid his history’s cornerstone. At its best, a neighborhood bar can become just that—a character in your life story, an ever-changing repository of plot twists, a constant volley of escalating tales, practiced and perfected.

A great neighborhood bar is a storyteller’s dream.

Great bars I have known and loved: Mirror, Barefoot Beach Bar in Placencia, Belize, and Rumours Wine Bar. You may not agree with my list; but it doesn’t matter. Your list isn’t mine, nor mine yours. It’s not about who mixes the best cocktail or offers the speediest service, although those aspects are delightful. No, the aspect I’m concerned with is a nameless intangible, a place’s tendency to engender Goodness, to act as a sort of petri dish for culturing Magical Nights. If there were a formula, it might look something like this:

The first variable is easy: Wine—that beguiler of wit, which maketh the sages to frolic and the serious to smile etc. etc.—pour some, and you’re off to the races. As for twinkly lights—by which I mean literal twinkly lights, but also, in a more figurative sense, a successful attempt to produce an effect/sensation entirely unlike that produced by a DMV waiting area—also not terribly difficult. Hang some colored Xmas strings, light a few candles, let the festivities commence. But surprisingly, a great many establishments eschew the Twinkly Lights Effect, choosing instead to install gigantic television sets all over their otherwise delightful bars/restaurants. And the @$$holes in ballcaps will follow. See mathematical axiom related to the twinkly lights effect below:

The degree of Twinkly-Lights Effect is inversely proportional to the number and size of television screens in an eating/drinking establishment, leading inexorably to the proliferation of @$$holes in ballcaps, often worn backwards.

Without wine and (figurative) twinkly lights, mystery can happen. But it probably won’t. That’s because the many Purveyors of Mystery whom I have known—raconteurs, crazies, aged flirts, filthy joke repositories, and lost souls—will pass right by the door as soon as they see there’s a baseball game flickering onscreen just inside (along with a bunch of backward-@$$ ballcaps bobbing up and down)…and their epic one-liners, oft-practiced Khruschev impressions, and impossible tales will clatter helplessly to the lonely sidewalk. Untold. Unenjoyed.

Mystery can’t be manufactured; it can only be welcomed, like building a cheerful little bird house and hoping the ornithology will follow. But if it does come, often in the form of a Judge J———, an Old Man Bob, a Sailor Bob, or a Japs (yep, that’s really his name), you’d better be ready for it, crank the twinkly lights up to rapid flash, and bust out a new case of wine, because what’s about to go down is:

ONE OF *THOSE* NIGHTS

It’s important to note here that There Might Be Regrets. You may have to call and apologize. You will likely have to ingest a packet of BC powder and, if you’re wise, an RC Cola. You may at some point need to arrange bail. But if you’re willing to relinquish full control of What May Come, if you have the guts and the heart for it, One Of *Those* Nights is simply not to be missed. It’s the night your favorite rock star picks up the (sizeable) tab, the night you initiate a reckless literary argument with a stranger who’ll one day be your best friend, the once-annual night of crazy dancing with Japs the Rasta Sailor, the night of burning chairs and broken glasses and Opa!

You can read about one of those nights here. They can change your life. 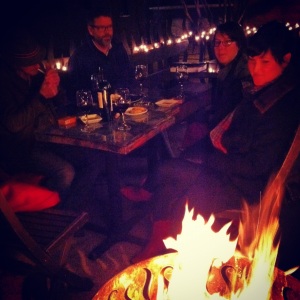 With Mirror long gone and Rumours razed and Barefoot a few thousand miles away, I’m not exactly sure whose doors those Wielders of Mystery will darken. The Halcyon Garden has seen more than its share of One Of Those Nights(es), to be sure—(Wine? check. Twinkly lights? check) But what I miss is the Mystery that I can only stumble into at someone else’s watering hole, when the world’s invited and you have no idea who might appear, what tales they might tell, and how it’s all going to end up.

Strange and “inappropriate” as it may seem, I’m in mourning for my Rumours. Thing is, I don’t hang with people who use words like “inappropriate;” they’re unlikely to purvey mystery, or to be willing to experience OOTN, even a single time. I don’t entirely trust folks like that. I have a sneaking hunch that those are the kind of folks who tore down our Wine Bar. I don’t know any of them personally, so I can’t rightly judge. But I have this notion that our values don’t much overlap, that they might not see the value in talking with crazy people well into the night, or in twinkly lights or in mystery per se. I think they might actually like big televisions hanging over the bar, so they won’t have engage in the requisite Koestler vs. Orwell debate with the old guy (of indeterminate nationality) two seats down. Unfortunately, these are the guys whose vision of neighborhood is going to be implemented on our street. *note: I am willing to be proven wrong about this. And if I am, I will be glad to declare my wrongness in these pages. Developers: shut me up, prove I’m mistaken about your seemingly prosaic vision. I dare you.

But this story isn’t about misbegotten development or the price of “progress.” It’s about beloved bars, places Where Everybody Knows Your Name (if I may beat a dead cliche where it lies). It’s about the people who stay up late and put up with our too-loud stories, in order to create a place that sometimes feels a little more like home than home itself. Thanks Colleen and Mike, Brice and Cassie, Jenn and Christy. Thanks for knowing what I want to drink/eat/say even when I don’t. Thanks for creating a medium in which Mystery and Magic may grow and thrive. 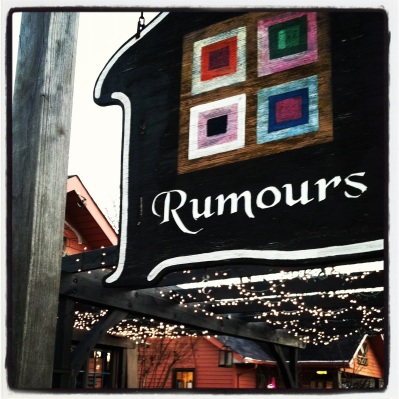 Fortunately for Hal and me, Rumours owners Christy Shuff and Jenn Doherty McCarthy aren’t wasting time with all this grousing and nostalgia. They’re busy wrapping up the last details of a new lease in the Gulch, just a couple miles north on 12th, spitting distance from Yazoo Brewery. “We’re excited about the new space,” says Shuff. Before long, Jenn will be guessing just which wine I want that night, smiling indulgently at the Too-Loud Storytellers, and filling us in on whatever mysteries need sharing. Rumours will spread, and I plan to be there to tell the tale.

If all goes well, construction begins next week. May the lights twinkle evermore, and the mystery ensue.

If you’re not up to speed on the story of Rumours’ closing and demolition, see the following articles:

Urban Spaces Worth Caring About

Open Letter to a Developer: What is Local?

The Hills Have Eyes (Nashville Scene)