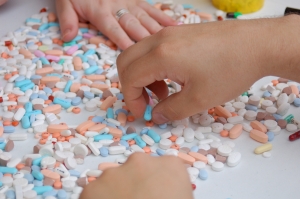 Two weeks ago, I did a WPLN piece on a Middle-Tennessee event aimed at helping folks dispose of their old prescription drugs safely and legally. You can hear the audio, read a transcript, and see a slideshow here.

Here’s how I know this is an idea whose time has come: the U.S. Senate just passed the Secure and Responsible Drug Disposal Act of 2010, which makes it easier for people to get rid of old prescription drugs at community events like these.

Why’s it so important, you ask? Consider these facts:

1. Tennessee is the second-most medicated state in the U.S., with an average of 16.9 prescriptions per person per year. (Blue Cross/Blue Shield report) No one is sure how many of those drugs go unused – I’ve seen a wide range of percentages cited in the media (with little to back them up).

2. Nine percent of twelve- to seventeen–year-olds surveyed in Tennessee said they used pain relievers that weren’t prescribed to them in 2007. (State of TN report, citing a SAMHSA report)*

Dickson police officers whom I interviewed at the event insisted that they’re seeing an explosion of prescription drug abuse on their beats. They talked about the growth of “pharm parties” among teenagers, in which they (allegedly) pour a potpourri of pills into a bowl and pop the “trail mix” like Halloween candy.

As scary as all that sounds, it’s anecdotal, so those tales can’t make it into a news story. But there’s no question that leftover prescription meds sitting around in the medicine cabinet aren’t doing anyone any good, and there’s a chance they can do great harm. Here’s a fact from a SAMHSA informational site:

“In 2000, 43 percent of those who ended up in hospital emergency rooms from drug overdoses-nearly a half million people-were there because of misusing prescription drugs.”

There are just too many good reasons not to keep the old meds around the house, not to throw them into the trash, and not to flush them. Getting rid of them at community-based events can prevent poisonings or “adverse drug events,” keeps them out of the hands of trash-pilferers or curious teenagers, and keeps pharmaceutical chemicals from making their way into the water system.

Problem is, what do you do with them? You can’t just take them back to the pharmacy, because the DEA requires that a law enforcement officer take possession of them. That’s what these community-based efforts, and this new legislation, hope to address.

To learn more about this issue, check out this informative Office of National Drug Control Policy site about prescription drug abuse and suggestions for proper disposal. And here’s a particularly alarmed-sounding Newsweek op ed that just came out today about the epidemic of prescription painkiller abuse in America.