That time a Kazakh human-rights attorney invited us to a lunch of Russian-style pelmeni at a Kampot, Cambodia roadside stand

February, 2016. After five weeks of interviews and “research” meals with Chantha in her Phnom Penh kitchen, she and I were ready to relax. We piled into her RAV4 and headed south to Kep, a lovely little seaside town not far from the Vietnamese border.

Crumbling French villas climbed the verdant hillsides overlooking a sleepy bay. In the shimmering noontime heat, Vietnamese tourists picnicked on a promenade by the beach as street vendors rolled by with stir-fried squid and fiery green-papaya salad, mixed on the spot.

Later, as the sun floated low in a crimson sea, we perused the fish market, then tore into a sumptuous meal of chhar kdam merec, local crab sauteed with garlic, green onion, and the region’s signature green peppercorn.

Each of those splendid meals was exactly what we’d hoped for—a standard-issue series of Kep feasts of the kind that people travel thousands of miles to savor.

What happened next was not part of the planned itinerary.

On our last morning in Kep, Chantha and I bobbed on the warm waves. Nearby, a thirty-something dad called out encouragements in Russian to his little son who was learning to swim. As we toweled off on the beach, I approached two women who, I figured, must be the little boy’s mother and a grandmother or aunt.

“Извините,” I said in cobwebby Russian, excusing myself and asking the time. The younger woman answered, and then surprise dawned on her face: someone was forming familiar words from her distant home country, here on a Cambodian beach. She flashed a wide grin. 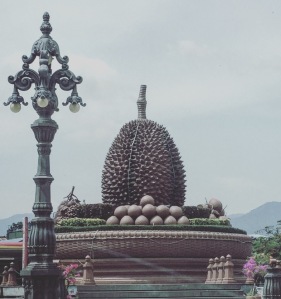 We chatted about her job as a human-rights lawyer—she’d worked at war crimes tribunals all over the world. And then she invited us to lunch at her home, in the nearby riverside town of Kampot, where she served pelmeni in her garden—which doubled as a roadside stand.

Russian dumplings. Made by Roza, a Kazakh human-rights attorney. In Kampot, Cambodia. Who says “nyet” to a lunch like that?

And that’s how Chantha, her son Johan, and I spent the afternoon: tearing through one plate after another of delicious dumplings, a signature dish from a frigid, faraway place.

An unforgettable and improbable accidental feast, and an unlikely friendship that abides, all because I asked for the time. 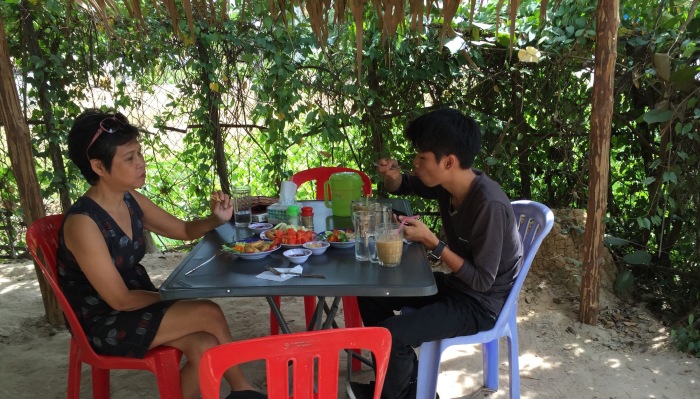