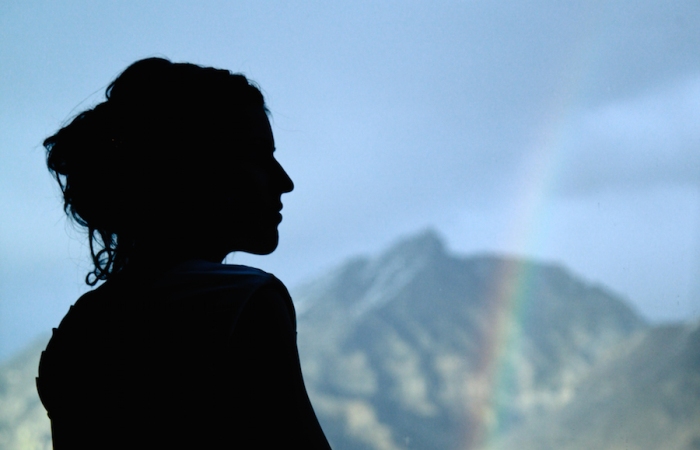 It’s been a tough week for Rolling Stone. Shortly after the magazine published an explosive feature about campus rapes at the University of Virginia at Charlottesville, a few quiet corners of the Internet began questioning the credibility of the story. Within a couple of weeks, the story had imploded, with Rolling Stone issuing a statement that acknowledged “mistakes” in reporting and offered a poorly-executed non-apology apology.

It all started with a thought-provoking blogpost by Richard Bradley, a former editor at George magazine. In a blogpost, Bradley wrote that he had worked with the famous fabulist Stephen Glass (who fabricated stories for the New Republic, Harper’s and even Rolling Stone). Thus burned, he’d learned to recognize a few of the hallmarks of too-perfect-to-be-true journalism of the sort that sacrifices the truth for a good story.

Bradley’s skepticism about the Rolling Stone piece by Sabrina Rubin Erdely stemmed not from any facts he personally knew to be false, but from a feeling he used to get whenever he read Stephen Glass’s stories: They were sensational. In fact, they were too perfect—perfect quotes, perfect anecdotes, all perfectly backing up one or another perfectly stunning premise.

Most of all, Bradley tended to be taken in by Glass’ fake stories “because they corroborated my pre-existing biases,” as he wrote in his blog:

The whole world lowered its guard, it seems, when Erdely’s piece hit the ether. The story exploded into the public discourse about sexual assault, prompting protests at UVA and soul-searching by school administrators. At first glance, this seemed like the outcome rape-prevention advocates had long been waiting for—an honest reckoning about how colleges handle rape charges, and maybe, a real effort by universities to make intelligent policy changes that treat both accused and accusers fairly.

It was a reckoning long in coming. Plenty of journalists have written about the problem of sexual assault on college campuses and how institutions often fail to protect victims. But what made Erdely’s Rolling Stone piece different—what made it spark widespread outrage and discussion in a way previous articles had not—was the story of “Jackie.”

“Erdely must have chosen this case, among all the other campus assaults she could have reported,” wrote Margaret Talbot for the New Yorker, “because its details were so horrible she knew it would get our attention.” Indeed, they were: Jackie claimed she’d been led into a dark room at a fraternity house her freshman year and gang raped, while her sociopathic “date” egged on the attackers. “Grab its motherfucking leg,” she recalled one of the men saying in the darkness. Jackie then told Erdely that after the attack, three friends of hers had callously dissuaded her from reporting the crime, fearing the social penalty they’d have to pay.

In tracing Jackie’s story through the next couple of years—her initial decision not to report the incident, her subsequent descent into depression, and later, her turning to a university administrator and to peer support groups for help—Erdely highlighted how ill-equipped universities are to adjudicate reports of sexual assault, which was the main point of the article.

That point got lost when the doubts started rolling in. Bradley caught the first whiff of something amiss—for him, the story didn’t add up, and he explained why, point by point, in his blog. And then, the Washington Post started doing some actual reporting.

Turns out, Erdely had failed to do some very basic fact-checking: She never spoke with any of the men Jackie accused of rape, or with anyone who could corroborate what happened that night. “This lapse is inexcusable,” wrote Erik Wemple for the Washington Post. And then came Rolling Stone’s jaw-dropping “note to readers,” in which the magazine disavowed the story and threw Jackie under a speeding bus:

“In the face of new information, there now appear to be discrepancies in Jackie’s account, and we have come to the conclusion that our trust in her was misplaced.”

The Internet piled on with a series of articles, in which journalists did some of the due-diligence Erdely should have done and uncovered sources who expressed doubt about Jackie’s account. And then, Rolling Stone bizarrely and furtively edited their mea culpa post to reflect a careful repositioning of blame—from squarely on Jackie’s shoulders to where it should have rested all along: “These mistakes are on Rolling Stone, not on Jackie.”

“We published the article with the firm belief that it was accurate. Given all of these reports, however, we have come to the conclusion that we were mistaken in honoring Jackie’s request to not contact the alleged assaulters to get their account. In trying to be sensitive to the unfair shame and humiliation many women feel after a sexual assault, we made a judgment – the kind of judgment reporters and editors make every day. We should have not made this agreement with Jackie and we should have worked harder to convince her that the truth would have been better served by getting the other side of the story.”

If, as the Washington Post reported, Rolling Stone ignored Jackie’s request to remove her from the article at some point in this process, it makes the magazine’s initial disavowal of her look all the more craven. And in failing to fact-check the story (and thus, protect their main source from a backlash of doubters), the editors and writer totally did NOT have Jackie’s back.

Let’s be clear: Erdely’s (and her editors’) massive failures of due diligence do not necessarily mean that Jackie was lying. There are a ton of conflicting and very confusing allegations on all sides, and a lot of the people who refute her story have plenty of reasons to lie. The only thing we know for sure is that nobody knows for sure what really happened that night. Something probably happened, say people close to Jackie. (“This story is not a hoax, a lie, or a scheme,” wrote Jackie’s former suitemate in a letter to the university paper.) And now, thanks to Rolling Stone, a new nightmare begins for her: Trolls have outed Jackie and exposed her to public abuse and shaming.

This fiasco is a devastating development for the movement to reform how assaults are handled on college campuses. “The debacle has led to crowing by skeptics who deny that there is a real problem with campus sexual assault,” said a New York Times editorial published yesterday. “For them, Rolling Stone’s willingness to accept Jackie’s story mirrors a national willingness to believe that campus assault has reached epidemic proportions.” 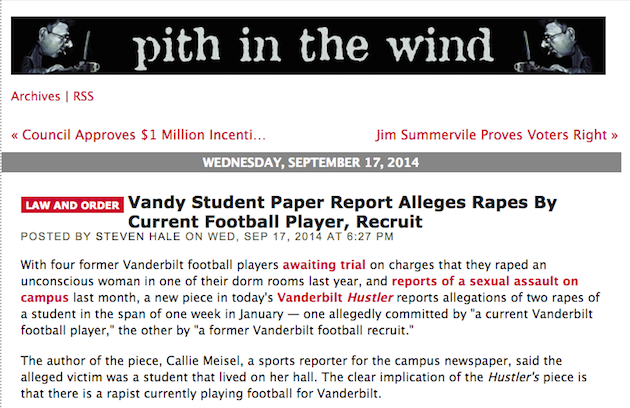 It’s also a giant step backward for past and future victims who report these crimes and are disbelieved and dismissed. “One of my biggest fears with these inconsistencies emerging is that people will be unwilling to believe survivors in the future,” Alex Pinkleton, a friend of Jackie’s who survived a rape at U.V.A., told the Washington Post:

“However, we need to remember that the majority of survivors who are coming forward are telling the truth…While the details of this one case may have been misreported, this does not erase the somber truth this article brought to light: rape is far more prevalent than we realize, and it is often misunderstood and mishandled by peers, institutions, and society at large.“

While I’m as pissed off as anyone about all this, I can understand how it happened, and so can Margaret Talbot. “As a journalist, it’s hard to talk to sources who may contradict a vulnerable person with whom you empathize, and in whom you have invested your trust,” she wrote in the New Yorker. “I hate that part of reporting, and would skip it if I could—but you can’t.”

I’m doing my own soul-searching in the wake of the Rolling Stone fiasco. Maybe it was my own biases that quieted my skepticism, or a simple belief that surely, Rolling Stone’s editors had done their jobs. Like millions of other readers, I bought the story, too. In fact, I wrote an outrage-fueled essay for the Nashville Scene about the way rape victims are often doubted and shamed, in which I urged people to “stop being assholes to rape victims.”

“Next time a person you love tells you about the awful thing that happened to them, don’t try to protect yourself from the awfulness of it. In fact, don’t think about yourself at all — think about the person who’s just confided in you. They are living the awfulness every day. All you have to say is, ‘I believe you. It’s not your fault.‘”

That essay’s basic premise is no less true in the wake of the Rolling Stone fiasco. And no matter how this story plays out, one thing will not change: my absolute belief in friends who confide in me with a terrible secret. In my personal experience, I find that victims who report rape are usually telling the truth (and are terrified of not being believed).

As a confidante, it’s my job to listen and trust. To a friend, I will always say, “I believe you. It’s not your fault.” Because there’s a long and ugly history of not only dismissing victims’ claims, but of punishing accusers for going public.

But being a friend is not the same thing as being a journalist.

When reporting a story, especially a story about something as traumatic as rape, a different mindset is required, a sort of “trust, but verify” presumption that begins with belief and follows up with an assiduous search for the truth. “It’s not wrong or disrespectful for reporters to ask for corroboration, or for editors to insist on it,” wrote Margaret Talbot in the New Yorker. “Truth-seeking won’t undermine efforts to prevent campus sexual assault and protect its victims; it should make them stronger and more effective.”

A very savvy radio-journalist friend of mine posted this on Facebook, in a thread about the Rolling Stone story: “Journalism 101 – Trust no one. Everyone’s working an angle. This is a failure so basic is disqualifies the piece from even being journalism. It is, in fact, the definition of fiction.”

In losing the narrative thread and becoming, in essence, a novelist, Ms. Erdely (and her editors) also lost our trust and did tremendous damage to the victims whose truth she sought to tell. Meanwhile, Rolling Stone’s reputation is in ruins. “Right now,” editor Will Dana told the New York Times, “We’re picking up the pieces.”

One of the difficult and deceptive things about journalism is that there are inherent pitfalls in using storytelling to point to greater truths. As any police detective will tell you, the ways people remember and interpret events are as flawed as human memory and understanding themselves—and that goes especially for people recalling traumatic experiences. “It’s possible that the truth of sexual violence is too messy to fit within journalism’s narrative preference for perfect victims and villains,” wrote Maya Dusenbery in a thoughtful essay about the limits of reportage.

“I believe in journalism, she concluded. “It aim(s) to tell the truth about this terrible, beautiful, complex world.” But in seeking to bend human experience into perfect, illustrative anecdotes that suit a writer’s narrative purpose, she added,”journalism can lie”—even when writers act in good faith.

A version of this story originally appeared in Pursuit Magazine.