Excused from the Jury for Cause

Three years ago, I asked a judge to release me from jury duty on a sexual assault trial. I felt I couldn’t consider the verdict fairly, I told her. I had my reasons, and they were personal. She smiled and excused me from the courtroom.

I wrote about that experience then. But looking back, I think I wasn’t quite ready to tell the story. This fall, I gave it another shot. 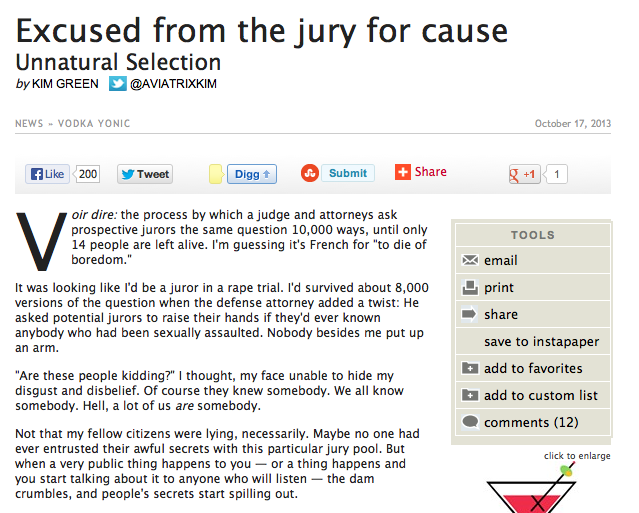 The two stories are pretty different. I know which one I think is better. But I’ll let you judge for yourself.

Lots of friends have posted publicly or written me private emails in response to these articles. Many of these are thank-you notes, or messages of support, or often, a chance for people to share their own private, painful histories. And more than anything, what catches my notice about these notes is that so many who write to me say that telling such a story is a brave act.

I treasure those messages, the support, and the shared stories. But my correspondents’ use of the word “brave” fills me with wonder. Here are my thoughts on the term:

Included in the Category of Brave:

Not Included in the Category of Brave:

It should not be considered courageous to expose your scars to the light. I wish it weren’t. Sadly, people do find it gutsy, courageous, or even just pathetic when you let yourself be that vulnerable—because the mean little judgements that people heap onto victims of assault can sometimes cause more internal bleeding than the assaults themselves.

If the victim in Stubenville had foreseen the kind of craven bullying she would face, would she have reported the crime? We’ll never be able to ask that question of Rehtaeh Parsons, a teen in Novia Scotia whose rapists photographed the assault and used the photos to shame and ridicule her. She committed suicide at age 17.

People* even pass judgement on the likes of Elizabeth Smart—Why didn’t you run/scream/fight? they ask, as if it were a 14-year-old girl’s duty, somehow, to let herself (and her family) be killed rather than defiled.

The  aforementioned young women were brave, and they suffered for their courage. Compared to theirs, my scars. Are. Nothing. Besides, I’m 43 years old. The scars aren’t wounds anymore, and I mostly don’t give a $%^# what anybody thinks. Read my story if you like. Pity the naive 21-year-old I was, and reassure yourself that you could never be so foolish as all that.

I wish I could tell you that “it” can’t happen to you, or to anyone you love. I want that reassurance to be true. But I’ve sworn myself to honesty, not secrecy. And that’s not brave—it’s pretty much my job.

*This statement assumes that Nancy Grace can rightly be classified as a person.

To read the Nashville Scene essay from earlier this month, click here.

To read the blogpost from three years ago, click here.

Or skip all that depressing stuff and go straight to this adorable cat photo.