A tiny work of fiction in memory of 9/11—an awful day for the human race, and a terrible day for airplanes, too. In this excerpt (adapted from a work in progress—a children’s story about airplanes and their people), two planes, an old warbird and an innocent little trainer, recall that tragic day and how it changed the relationship between humans and airplanes forever.

A furious winter wind howled across the deserted airport tarmac, as a well-worn man with deep grooves cut into his leathery face untied the ropes that held Papa Tango in place and clamped a tow bar onto his nose gear. He pulled the little Cessna 172 across the gusty ramp, cranked open a heavy hangar door, and towed the plane inside.

An electric thrill coursed through Papa Tango’s wiring as the man popped off a series of cowling mount screws to expose the grimy engine beneath, then began draining the plane’s oil into a pail. Surely this meant the little trainer would fly again soon! How he had missed feeling the air at play against his curving airfoils.

The hangar’s interior darkened and fell silent as the man pulled the big door closed and disappeared. Pale light filtered through billions of hovering dust motes from a row of windows high up on the hangar walls.

Papa Tango could just make out the indistinct shapes of disused airplanes through the gloom. One of them had a long, massive, gleaming nose that pointed high into the air, its tail leaning back low on a single wheel in the rear. The engine underneath that giant cowling must be incredibly powerful, thought Papa Tango with wonder. And the craft’s huge propeller would surely cut a mighty arc through the wind when its four blades whirled.

Papa Tango knew that he and this stately craft had characteristics in common. They were both airplanes, after all. They had wings and engines, cockpits and landing gear, tails and propellers. But to the tiny Cessna, the similarities stopped there. Papa Tango’s wings stretched out above his cockpit, whereas the big plane’s wings were lower, below a sleek glassed-in canopy. Both planes had two “main” gear wheels under the cockpit, but the Cessna’s third wheel was in front, under the nose, instead of in the back, under the tail. But the strangest thing of all was a series of sinister-looking dark holes along the wings’ leading edges. Papa Tango didn’t have anything like these on his wings. What on earth were they?

Papa Tango suddenly heard a deep, muffled rumble—it sounded a bit like the roar of a tired old engine coughing to life. The low sound began to rise and morph into something—was it, could it be laughter? It seemed to emanate from the gleaming tailwheel airplane he’d been admiring. 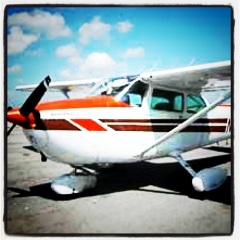 “What’s that?” Papa Tango ventured. Was the laughter something he heard, or something he just sensed? He felt very unsure and silly all of a sudden.

“Machine guns,” came a voice, all gravel and growl.

“Wh—wh—at?” squeaked the Cessna, suddenly embarrassed by his smallness and his exposed, cowling-less engine.

“The holes on my leading edges,” the gravelly voice said, issuing another rumbling laugh. “They’re for machine gun fire!”

“Machine…guns?” exclaimed Papa Tango. The phrase made no sense at all to him.

This was all much more than Papa Tango could take in. “You mean, planes shoot at each other?!”

“In wars they do,” said the Mustang, a little more gently. “Sometimes.”

The dog-eared little Cessna all at once felt terribly naïve. To him, airplanes were for fun—joyfully whirling and soaring in the big blue sky, skirting columns of silvery cumulus clouds. Occasionally there was work to do—students to train, dangerous weather to avoid or muscle through, air traffic controllers to obey—and sometimes, there were even important places to go.

But mostly, the kind of flying Papa Tango knew about was flight for the sheer pleasure of it. He knew that sometimes bad things happened, that occasionally planes crashed, and people were hurt or killed. But to think that planes—or people, that is—shot at each other in the sky!

“I-I don’t understand. Why would they do that? I thought—I thought we were supposed to help people!” the Cessna exclaimed, his oil going drip, drip, drip into the pail. “We’re not supposed to attack them!”

“We only do what they tell us to do,” said the stocky Mustang quietly. “If we’re lucky, the wisest pilots choose us. And then, we do our best for them.”

Papa Tango was shaken to his core. It had never occurred to him that an airplane could be made to purposely do harm, that it might actually be designed to do so. The warbird sighed.

“A terrible thing,” she went on. “Ships and cities in flames, burning planes tumblin’ from the sky. But there was meaning in it, I guess. We planes helped our pilots end an awful war.”

Papa Tango began to feel an even greater awe for this old warbird. She had done an important job in the world, had helped protect people. What have I ever done that mattered? he wondered.

“But what’s even worse…” the Mustang trailed off.

“What’s even worse?” he put in, with more than a little trepidation. The darkness suddenly felt thick and menacing, and Papa Tango began to reflect fearfully on the past few summers: how the people who used to fly him had gradually stopped appearing at the airport. And finally, for a whole summer, how no one had flown him at all. It was a terrible feeling to be grounded and still, unneeded by anyone.

“Do you remember, a few years ago, when all the planes stopped flying for awhile? When all the contrails disappeared?”

“That’s the day everything changed for us airplanes,” she said gravely.

“That day in September—as long as I live and fly, I will never see any meaning in that. Somebody took over big jets—not warbirds like me, but airliners fulla people. And they crashed the jets into tall buildings. They used us! Made us betray our people. On the most beautiful, clear, blue fall mornin’ you’ve ever seen, a day made for flying.”

Her now angry voice trailed off into silence like thunder echoing across a vast plain. That’s why nobody wants to fly me anymore, Papa Tango thought. After this, people probably don’t trust us.

Papa Tango felt a sadness and helplessness such as he had never known. Were airplanes really nothing more than instruments of men’s desires, good or evil? Did the big Mustang, the doomed airliners, and Papa Tango himself, did none of them have a say in their fates or in the actions and destinies of their pilots and passengers? Papa Tango just couldn’t bring himself to believe such a thing. All the excitement of the day drained out of him like the oil dripping from his engine.

There was no light at all now leaking through the hangar windows. A grim silence fell, broken only by the wind buffeting and rattling the windowpanes.