I never thought I’d see Moscow again, although I dreamed of it for fourteen years. 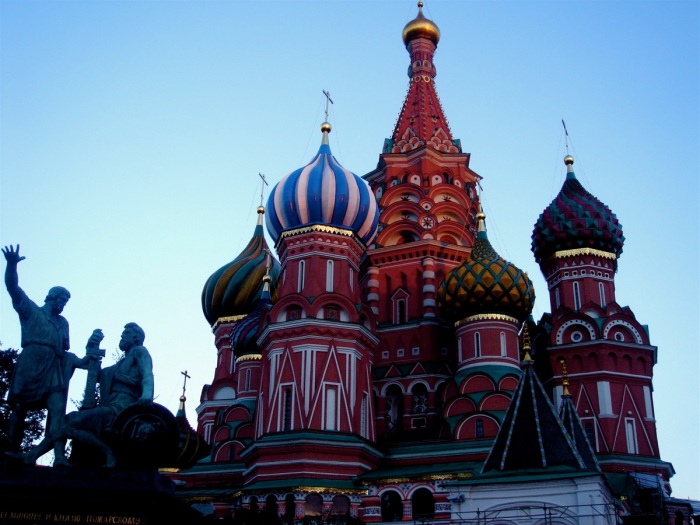 I boarded a teeming Aeroflot flight in late summer 2005, as Katrina’s receding waters revealed, inch by inch, the erasure of New Orleans as I once knew it.

Mourning for that blighted, intoxicating city, I rushed towards another place I loved, another place seemingly cursed by geography and ill winds, a city whose history gets rebooted every few generations by overreaching occupiers, paranoid autocrats, and most recently, venal oligarchs.

I hadn’t set eyes on Moscow in fourteen years, and I had my own erasing to do. I couldn’t rewrite my own history there, of course; but if I could add two sunlit weeks to my story in that place, I hoped my own flood of oily-black memories might at last evaporate, or at least retreat obediently, gently undulating, into a distant seabed.

Eyes closed, I relaxed into “Wish You Were Here” on my iPod as we landed at Sheremetyevo, hoping (to no avail) that I could recapture the same thrill I felt as our train clattered towards Moscow in late summer of 1991. I recall singing along while one of the guitar-playing students in our group muddled through the chords, as the well-lighted West shrank behind us, and eerie, green-gray, fishbowl images of Soviet Russia scrolled by our windows.

Pink Floyd captured our mood perfectly that day; we felt wonderfully knowing, like youthful but worldly adventurers squaring off against vague, undifferentiated peril. So, so you think you can tell, heaven from hell?

What we didn’t realize yet was that the USSR’s death throes would deliver us plenty of both. There we were, the terminally naïve, catapulting unprepared into a vast, dying empire, a week after a coup that launched the ill-fated, wild-West era of Yeltsin and his kleptocrat cronies. In four months we would board a westbound train for home, and the Soviet Union would cease to exist. We’d bumbled into a cataclysm, its turbulent winds electrifying but potentially destructive. Riding the bipolar wave of anxiety and exultation that accompanied all that turbulence exerted a powerful hold on us, in a way a semester in Paris never could. Moscow was dangerously addictive.

That winter, in the thick of it all, my grasp of those weighty events was limited to scattered personal observations: how lines to buy potatoes and bread got longer as the days grew shorter; how elderly Russian women stopped me in the street to express their helpless rage at the cascading changes; and how four students in our group were victims of violence that winter.

Although in most ways, the fall of the Soviet Union bore no resemblance to a natural disaster, the chaos and lawlessness that ensued selected its victims as arbitrarily as any tornado, flood, or earthquake. In my case, the USSR’s final days will always intertwine with the memory of being assaulted and held captive for the ten longest, darkest hours of my life. There was a moment that night when my mind fell quiet, and I considered my predicament: trapped in some murky room, outnumbered three to one, making a careful count of knives in sheaths, I wondered, will I live? And I calculated, with astonishing clarity, how to ensure that I would.

That momentary lucidity deserted me in the troubled years and bouts of depression that followed. I went home, leaving Moscow behind entirely—losing contact with old friends, discarding photos, even forgetting most of my Russian. But night after night I dreamed about the place, a frequent, gauzy film featuring me rushing into my Russian friends’ embraces and once again devouring a bowl of hot dumplings in their cheery kitchen, a golden-bright bulwark against long winter nights. Whatever I had done wrong to “get myself into trouble” (as the bewildered, but reproachful questions of well-meaning friends seemed to suggest), however stupid and young I had been, however I had failed, all was forgiven.

As it turned out, Moscow wanted me back, and made the first overture. In my twenties, instead of becoming some adventurous, polyglot expatriate, as I’d envisioned, I became a pilot and flight instructor back home in Nashville. Which is why, in 2002, I found myself at a conference of women aviators, where I happened to meet a couple of boisterous Russian women, one of whom was a world aerobatics champion, and the other, a WWII veteran bombardier named Galina.

It was a revelation: Soviet women had flown combat missions against the Nazis! I spent the rest of the conference with the Russian aviatrixes, struggling mightily to resurrect my disused language skills. Afterwards, I stayed in touch.

By summer 2005, that inexplicable force we often call “synchronicity” had gathered strength like an electrical storm, ready to release its charged energy. “Aviatrissa,” a Russian airwomen’s club, invited me to attend a Moscow conference, and a parallel opportunity unfolded—the chance to collaborate on translating and editing a WWII memoir by Anna Yegorova, a former Soviet attack pilot. 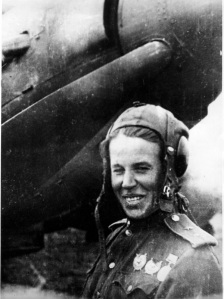 A tiny voice in my head whispered YES, and it seemed to know what it was talking about.

I was thrilled, but also uneasy. It wasn’t a rational, physical fear, but a deeper, more inscrutable one. I was afraid of failing, of letting Moscow defeat me. The standings were currently Moscow 1, Kim 0, you could argue. I wasn’t looking to inflict damage on the city to bring the tally to one-all. I only had, somehow, to find the brightly-lit kitchen experience, to discover the human kindness amid the hostile babushki ticket-takers and extortive Red Square policemen. And I had to convince Anna that she could trust me, that I was the right person to help tell her extraordinary life story to Americans. I hoped my tattered Russian was up to the task.

Although Moscow handed me plenty of victories, defeats and draws those two weeks, the trip began inauspiciously. On day two, my husband Hal and I took the metro to Izmailovsky Park, a massive flea-market in the city’s outskirts. I hesitantly threaded my way through the stalls of sub-par bags and sneakers, pausing, out of timid politeness, to try on a jacket a hawker pressed towards me. Suddenly, a throng of swarthy, overeager leather salesmen assailed me, pulling and grasping at my arms, barking at me to try their wares. Perfectly innocent though it was, the scene awakened some dark, reasonless old terror in me. My husband Hal saw my panic, knew why it might tend to arise disproportionately to the situation, and extracted me. I retreated to the hotel, feeling thoroughly overwhelmed.

Fortunately, I didn’t stay there in hiding. Reuniting with my dearest 1991 friends proved as joyous as the celluloid reel of my recurring dream—gleeful screams and hugs and vodka toasts. That evened the score, I figured.

And then there was the long afternoon spent at Anna Yegorova’s apartment with Hal and my soon-to-be co-translator, Margarita. We feasted on kebabs and smoked salmon, pickles and black bread, and washed them down with homemade vodka we took turns swigging out of a canteen. “Just like my combat rations,” Anna giggled. Margarita and I paged through yellowed photographs of Anna’s former comrades-in-arms. And we three agreed to see to it her memoir was published in America (a richly fulfilling experience all its own), sealing our pact with effusive, escalating toasts in fine Russian fashion. It was one of the most extraordinary and magical moments of my life.

Even then, Moscow wasn’t finished smiling on me. On the last day of the conference, we attendees boarded a boat on a drippy September afternoon and churned through the giant city, tracing the Moscow River’s course. A tableful of female WWII veterans warmed the chilly room with their enthusiastic choruses of wartime ballads, their chatter and laughter.

I took a few deep breaths, ventured nervously to their table, and introduced myself. An elderly MiG test pilot named Lidia looked me over, sized me up, and seemed to decide something.

That’s when the wall came down.

Lidia put her arm around me and poured pink champagne into paper cups all around.  My old bombardier friend Galina, bristling with medals, spent the afternoon making grandiose toasts to Soviet heroism and pushing sausage sandwiches towards me. It was exactly the sort of experience I’d come to Moscow hoping to find.

Galina, Margarita, and the WWII veterans; (me with inexplicably crazed eyes – the wine perhaps?)

At one point a quiet woman at the adjoining table tapped me on the shoulder. “I overheard you saying you are American,” she said. “We’ve seen what’s happening in New Orleans on TV, and we also know what day it is and what that means to you.” I suddenly realized I’d forgotten the date.

“Let’s drink to you and to America, in this difficult time of Katrina, and on September 11,” she continued, raising her paper cup. “We are with you. All of us are women. We are pilots. We are as one.”

Somehow, impossibly, those women were acknowledging our American tragedies, after all the catastrophes they had seen and suffered in their lives. “To us,” I stammered, humbled, unable to think of anything more to say. And I raised my paper cup with them, those tough old broads, those Great Patriotic War veterans. With a tableful of war heroes, I drank a toast to the disasters life doles out, to misfortunes we all share and must learn to survive.

That’s when I stopped keeping score.

7 thoughts on “Back in the (Former) USSR”