The last time I saw her, she was dressed as Linda Ronstadt on the “Living in the U.S.A.” album cover – satin jacket, roller skates, knee socks, and all.

Ordinarily, I wouldn’t leave home dressed in mostly duct tape and a white nightgown (see the “Blondie’s Greatest Hits” album cover), but then, you never knew what you were going to agree to do when Melissa Duke was in the mix.

I doubt I’m the only one who thought, “Crap!!” when Melissa announced her birthday party theme last year: “Dress as your favorite (or any) album cover.”

“What the #&$%?!?” I thought, and anybody who says they didn’t think the same thing is rewriting history. Angst and the gnashing of teeth presided over the weeks before this party. But no matter how much we whined that we didn’t have a thing to wear, no matter how long we procrastinated or worried that we weren’t creative enough to hang with the likes of Duke, we ultimately manned up and showed up at FooBar in the craziest outfits you can imagine. 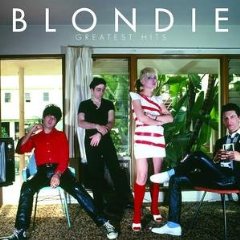 The duct tape was harder to operate than you might imagine

Somebody made an entire Pink Floyd “Delicate Sound of Thunder” light bulb suit. A couple showed up dressed only in two bath towels apiece, with some kind of soapy stuff all over their faces. I still don’t know what album that was, but they looked fantastic. Keep in mind: it was about twenty degrees outside.

Something about being around Melissa made you decide, “OK, I’m going for it.” She always did. Walked all the way out on the limb and jumped up and down on it. And when she did it, it looked like so much fun, you wanted to get way out there on the edge, too, and to #*!! with all those cracking sounds. She brought out the diva in all of us. In a good way.

Maybe I’m doing her a disservice by describing her utter fearlessness in terms of an uncanny ability to throw the best party everrrrr. Guts come in many varieties, and hers took the form of being able to talk to absolutely anyone without self-consciousness, guile, or social anxiety of any kind. It was incredible: she would walk into a room full of people and, by the end of the party, would have held conversations with just about everyone there. She was sincerely happy to see each one of them. And every person she talked to felt, as she stood there next to them, that the sun was shining on that one little spot.

Ronstadt - Melissa could belt out one helluva rendition of "Different Drum"

This is one of the most wonderful gifts a person can have: a genuine interest in people, and the ability to make anyone feel completely at ease and as though they were your very favorite person. I’m tortured by shyness; and so to see Melissa work a room with her gigantic, sincere, winning personality was like watching Jimi Hendrix make an electric guitar his b#$%&.

Fortunately for this planet, Melissa mostly used this power for good. Her prodigious energies, applied to evil, would surely foil the best efforts of 007, Jason Bourne, and the baddest-@$$ thwarters of world domination everywhere. And I would be her simpering evil sidekick, if she would have me.

Instead, she just made cool things happen. My husband Hal was joking one day about the new bathroom he was installing, how it was gonna be a man bathroom, how he was gonna read all the magazines he wanted in there, make the toilet extra tall, and leave the seat up as often as he pleased. The next thing we knew, she delivered him a framed sign that said “Manroom. Seat up.”…that she had embroidered. Embroidered!

This guy doesn't sit down much

Here is a woman who built entire gingerbread housing developments for her girl scout troop’s parties. Who got on the horn with 26 different rock stars to get permission to include their images in a children’s “Rock ‘n’ Roll ABC” book she created. Who made a mean shrimp and grits, threw a killer Mardi Gras fête every year, and never, ever failed to show up at your birthday party. Did I mention the full-time job as media “fixer”? The great husband and two gorgeous girl- children? The burlesque shows she performed in? The band she sometimes sang with? Do you feel unworthy yet?

If you said “yes,” she would just laugh at you. Right before she pulled you in as co-conspirator on another of her grand schemes.

You should have seen Melissa’s funeral. Judging from the standing-room only crowd in the church, odds are, you were there. Everybody was. And the after-gathering was the most amazing, colorful, joyful, roller-coaster of a wake I have ever witnessed. In memory of Melissa, great lover of all things New Orleans, we promenaded around East Nashville behind a Dixieland brass band–we, a rollicking Second Line in all its glitter and glam: feathered burlesque girls, hipsters in leather, little girls spinning tiny, bright parasols under a pale winter sky. 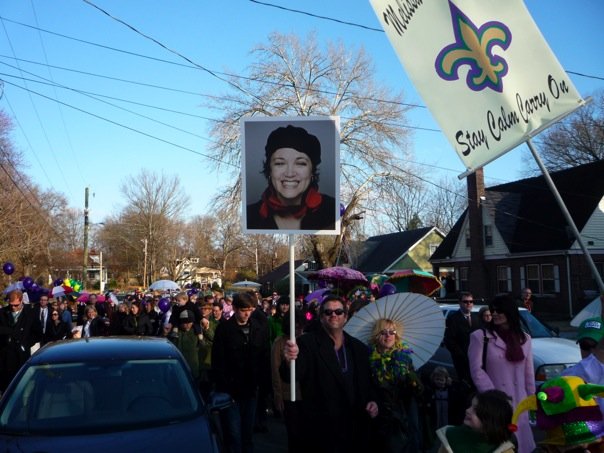 This week, a few close friends will hold quiet gatherings–remembrances of our shared Duke experiences, and a reinforcement of the community she created, one that seemed to draw together and cohere in her absence. We began to seek each other out in those awful days after her death. That community may contract and mutate and change over time, but I believe it will endure.

I know I’m not alone when I tell you that thinking about Melissa shames me sometimes. She’s shooting me a dimpled smirk from her spot on the kitchen mantel right now, daring me to do something that scares me. I can’t own a room like Melissa could, or cold-call rock icons with confidence, but I can try a little harder to bring people together. I can shove down my fear the next time I’ve gotta call somebody intimidating to interview them.

I can have a crazy ridiculous birthday costume party.

Last year, Melissa kindly allowed me to glom onto her birthday, as mine was a mere three days later. I see that party as a kind of apprenticeship: I’m not ready to graduate to roller skates yet, but I’ll edge out a little closer on that limb, invite everybody I know, and not overworry about whether they will come.

There are so many things I wish I could ask her: how do I learn to talk to everybody? How do I make each person I meet feel important and wonderful? How can I make the sunlight come streaming out of my pores like you did?

I have no idea, and even if Melissa were here to tell me, I’d still have to figure it out for myself. All I know to do is to put on a ridiculous astronaut suit on Sunday, show up at my “What Did You Want to Be When You Grew Up?”-themed 40th birthday party, and fake it as best I can. I thought of dressing as Melissa, but really? That would just be pathetic.

Miss Moon Duke: tonight, we raise out glasses, compare our many fleur-de-lis tattoos we got last February, and think of you, with a lot of joy and a tiny bit of shame.

Sometimes, shame can motivate. We all know we could stand to be a little more Dukelike. We realize we should leave it all out there on the field, like you always did, but we’re afraid. We’re not sure we can. But we’re damn well gonna try.